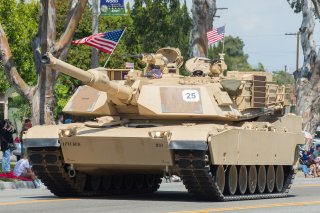 Here's What You Need To Remember: Other colorful names included "Cruel Intentions" and "Baby Yoda" - but Captain Collins took the cake.

Ever since the British Army introduced the tank on the battlefields of the Western Front during the First World War, it has been common for some crews to give the tank a name. This practice likely had its origin in the fact that the tank as we know it grew out of the "Landship" program, and the British officers named the tanks that certainly showed their classical education.

One factor was that tanks had to have their names began with the same letter of the unit – and as Forbes reported, all the tanks of 'A' battalion would subsequently have names such as "Achilles," or "Ajax." Later tanks were named for the crew's hometowns and by the Second World War, the naming had become more colorful to say the least.

The practice of naming tanks has continued, and last month the Third Infantry Division reached out on social media and asked for soldiers to determine what M1 Abrams tank had the best name in the U.S. Army. While many that stood out including "All You Can Eat," "Cruel Intentions" and even "Baby Yoda," one particular name likely caught many off guard.

Meet "Barbie's Dreamhouse," a tank crewed by Captain Jillian Collins. On her official Twitter account (@Jillian96665671), she responded, "Why Barbie Dreamhouse? Every little girl dreams of having a Barbie Dreamhouse. For me, it became my Tank. For years, I was told 'No' I was told 'Armor isn't open to Women', but kept pushing. Thus, eventually finding myself in my dream job with my very own Barbie Dreamh(o)use."

As Task & Purpose reported, in addition to having a simply great name for the tank, the crew of Barbie's Dreamhouse proved that it was quite the team. During the gunnery exercise, the crewed scored a "distinguished" rating, which is defined as "over 900 points and qualifying on 9/10 engagements." In total the crew finished with a 934/1000 qualifying on 10/10 engagements.

While women don't make up a large number of tank crews in the U.S. military, the numbers are on the rise since Sgt. 1st Class Erin Smith became the first female enlisted soldier to graduate from the U.S. Army's M1 Armor Crewman School in June 2016. Smith had joined the Guard as a combat medic in 2001 and has served overseas tours in Bosnia in 2002 and in Iraq in 2004. She then took advantage of a loosening of regulations that previously prohibited women from serving in combat roles.

Less than a year after Smith graduated from the Army's program, 2nd Lt. Lillian Polatchek graduated at the top of her class from the Army's Armor Basic Officer Leaders Course, becoming the United States Marine Corps' first female tank officer.

The five-month-long course teaches prospective tank officers fundamentals, tactics, and any basic armor knowledge that they will need to safely and efficiently operate a tank. Determining a colorful moniker for the tank is something the tankers come up with all on their own.