Americans Divided By Race on Coronavirus and Police Concerns: Poll 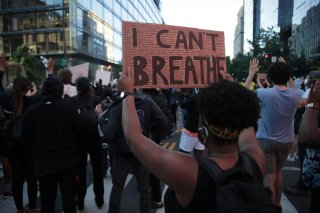 A new poll finds a racial divide among Americans when asked about trust in law enforcement and fears surrounding coronavirus.

When asked if they trusted local police, 77% of white Americans said yes, while only 36% of black Americans agreed, according to an Axios/Ipsos poll.

The difference in responses was “one of many measures of a throbbing racial divide in Week 11 of the Axios-Ipsos Coronavirus Index, taken the week George Floyd was killed by a white policeman in Minneapolis,” Axios reported.

Another dividing factor among respondents was age. Just half of younger Americans trust the police, contrasted with 80% of seniors responding positively, according to the poll.

“A longstanding set of grievances in the African-American community with the police and how they deal with the community,” Ipsos U.S. Public Affairs president Cliff Young told Axios. “Race differences are massive. And it’s simmering…you take this issue and you overlay just the absolute hopelessness people are feeling,” he added.

The report references Nikki Jones, who says the “findings on police trust are in keeping with divisions since the protests in Ferguson, Mo., after the killing of Michael Brown in 2014.” Jones is an expert on African American’ experiences with the criminal justice system and a professor at the University of California-Berkeley, according to Axios.

“The striking lack of concern for black people – and the striking ignorance of bias – it is shocking to see those numbers play out” and it might “feed the devastating consequences we’re seeing now,” Jones added.

The Axios/Ipsos Poll was based on a “national representative probability sample of 1,033 general population adults age 18 or older” that was conducted May 29 through June 1, according to Axios.

Axios reported the margin of sampling error to be within 3.2 percentage points with 95% confidence, for their results based on the entire sample. The margin of error for responses by African Americans, who make up 13% of the U.S. population, was within 10 percentage points, according to Axios.