Americans Think the Founding Fathers Were Evil. You Should Be Afraid. 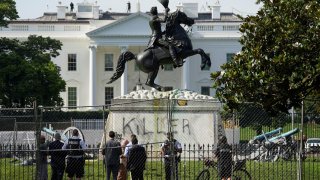 Were the Founding Fathers heroes or villains?

While this dichotomy perhaps oversimplifies our attitude toward the founding generation, one would imagine that most Americans think that their country’s origin is fundamentally good.

Few political movements in the history of the United States have truly distanced themselves from the founding. Many have tried to twist and distort the founding, but almost all successful ones have at least sought to hitch their wagons to 1776.

A growing number of young Americans are not only ambivalent, but are outright hostile, toward America’s national origin.

Poll respondents overwhelmingly said that the Founders were “heroes” as opposed to villains.

However, when one breaks down the numbers by age, one notices a radical, generational shift in views.

As Josh Kraushaar, a columnist for the National Journal, noted on Twitter, Americans over 45 almost universally see the Founders as heroes, and only a tiny number see them as villains.

However, nearly the same number of Americans under 45, according to the poll, see the Founders as villains as opposed to heroes.

If one wonders why there is such a ferocious effort to tear down statues and erase America’s past, that explains the phenomenon to a large extent.

Many young Americans have been marinated in a stew of a hostile version of America’s past based on the teachings of the late radical historian Howard Zinn and many others of the new left. Either that or they simply know nothing at all as civics knowledge collapses.

The result is a militant wing of young people hellbent on putting an end to America and the West.

On the other hand, you have a shrinking number of young Americans who can even articulate what it is they are trying to conserve in America. They now feel overwhelmed and pressured to go along with a ruthless cultural revolution that tolerates no dissent.

In a battle between zealots and the perhaps larger numbers of uniformed or uncommitted, bet on the zealots.

The summer of 2020, if anything, has exposed how late in the game this culture war is. These really are the times that try men’s souls.

However, as dark and foreboding as this moment may seem to patriots who still cling to the idea that America is a flawed, but ultimately great and exceptional country, it at least provides clarity.

The war on history, as I explained in my book “The War on History: The Conspiracy to Rewrite America’s Past,” is not about any particular figure or statue. Nor is it about simply correcting a past wrong to build a stronger future.

No, it’s about toppling the foundation of this country. It’s about sweeping away America’s past, both its institutions and culture, in an effort to begin again at year zero.

In his famed first inaugural address in 1801, Thomas Jefferson spoke to a nation deeply divided, where one political “party”—or “faction,” really—replaced another.

Jefferson calmed the country by noting that “we are all republicans, we are all federalists,” the two political sides of that time.

He said that while there were serious disagreements over the issues of the day, most Americans were committed to republican self-government, the principles of 1776.

Now, Jefferson may have harbored deep suspicions that his opponents were closet monarchists, but his statement hit the mark. Certainly, he was right that “every difference of opinion is not a difference of principle,” and that attachment to the principles of the founding remained strong, no matter how they were interpreted.

Can we say that today?

On this issue, like no other, a line must be drawn.

America is more diverse today—by ethnicity, race, and religion—than it has ever been. If the once nearly universal attachment to our history and ideals—the very reason for America’s being—comes undone, it will be impossible to hold onto the concept of e pluribus unum, or “out of many, one.”

Our history, the good and the bad, binds us together. Our attachment to the founding gives us unity of purpose, despite the country’s remarkable diversity.

Not only that, but the ideas attached to that founding, even if not always adhered to, have given us the remarkable ability to correct wrongs and stand strong in the face of great evils at home and abroad.

The American way of life bends toward justice because we have a just system.

So, it is essential right now for Americans to stand fast in the face of this looming revolution that would ultimately deliver us into tyranny. We need to better prepare and inform ourselves so that we may explain our reason for being in debates with our fellow citizens as long as debate and dissent are still allowed and protected.

For those looking for better ways to defend the founding, an excellent source of material is a new book, “America on Trial: A Defense of the Founding” by Robert R. Reilly.

Reilly deftly defends the very essence of what America was built on from critics on the left who are dedicated to its destruction, and even from some on the right who are misguided in thinking that the radicalism of today stems from 1776.

He asks rhetorically in his introduction whether “America was founded on basic principles that are true and just—ones that we can unqualifiedly support—or whether the republic was based on ideas that are false and unavoidably lead to corporate and individual evil.”

The left increasingly answers that question with “no.” Those who disagree are quickly being canceled.

Following the flawed logic and history of The New York Times’ so-called 1619 Project, they ultimately conclude that America’s essence is slavery and white supremacy. To be a good person—an “anti-racist” as they define it—is to be against America.

Is that what most Americans now believe? If so, and if that trend continues, there will ultimately be no America and certainly no Constitution to fall back on.

Reilly counters that line of thought and provides a superb foundation for arguing why America is an inherently good and successful country, a culmination of the best ideas in Western thought materialized in a society most capable of embracing them.

He concludes that America has gone astray because it has “not remained true to the Founding.”

“The Founding is not the problem; it’s the solution,” Reilly wrote. “We had best return to its principles before it’s too late.”

Americans must recommit to understanding our history and origins. And more than that, we must be brave and willing to stand up for it in the face of powerful cultural headwinds.

Abraham Lincoln once said that “right makes might,” that the justice and truth of a cause gives it power.

The mobs burning our cities are attempting to impose their will on Americans by force as many of our leaders shamefully stand by and watch, or even join in the anarchy.

But these people still do not speak for the majority, nor do they provide a healthy way to make America a stronger or more just society.

They stand for antipathy, destruction, and mobocracy, not hope or unity or a better future.

Again, this must be a moment of clarity. Will Americans still embrace that light in the darkness in the face of critics at home and the challenge of a rising superpower across the Pacific, or will we fade into the long night of history as our country and the world plunges into a new dark age?

These are not the days for sunshine patriots.

We have hard work and troubled times ahead.

Many will shrink in the face of ruthless “woke” mobs, empowered by the steady drumbeat of support coming from America’s elite cultural institutions.

Tyranny, like hell, is not easily conquered, as a great American pamphleteer once said.

What we do and what we say now may very well determine whether 1776, and the great country we’ve inherited, stands or falls.

This article by Jarrett Stepman first appeared in The Daily Signal on July 26, 2020.