America's B-1 Bombers are in Terrible Shape 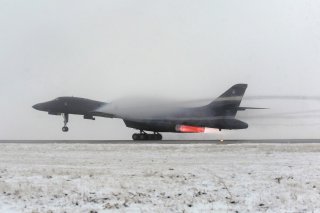 Here's What You Need to Remember: And the B-1’s readiness woes could force the Air Force to buy the B-21s more quickly, as the older swing-wing bombers might not last into the 2030s.

The B-1 shortfall could weigh on the Air Force’s plans for a new bomber.

Fifteen of the swing-wing B-1s are in depots for maintenance. Thirty-nine aircraft are down for inspections, Rounds said during a Senate Armed Services Committee confirmation hearing for Air Force general John Hyten.

Hyten was Pres. Donald Trump’s nominee to become vice chairman of the Joint Chiefs of Staff. His candidacy is imperiled by a serious accusation of sexual assault.

Ellsworth Air Force Base in South Dakota houses two B-1 squadrons. Others are based in Texas and California. B-1s for many years flew from bases in the Middle East for long-endurance close-air-support missions over Iraq and Afghanistan.

Round-the-clock operations took a toll on the 1980s-vintage warplanes. The Air Force twice in 2018 and 2019 grounded the B-1 fleet following mechanical failures.

A dearth of flyable B-1s has compelled the Air Force to transfer aircrew to other types, according to Air Force magazine reporter Rachel Cohen, citing a Senate subcommittee report.

Heather Wilson's announcement raises a multi-billion-dollar question. How does the Air Force plan to equip the five new bomber squadrons the service said it needed as part of its September 2018 plan to grow from 312 squadrons to 386?

And the B-1’s readiness woes could force the Air Force to buy the B-21s more quickly, as the older swing-wing bombers might not last into the 2030s. “The general consensus is, we don’t have enough long-range strike capacity,” Stephen Wilson said.

Wilson told the Washington, D.C. audience he in recent weeks visited Northrop Grumman’s facilities in Melbourne, Florida, where he was “looking at the B-21.”

Northrop is “moving out on that pretty fast.” Wilson said, adding he has an app on his phone “counting down the days … and don’t hold me to it, but it’s something like 863 days to first flight.”

David Axe serves as Defense Editor of the National Interest. He is the author of the graphic novels War Fix, War Is Boring and Machete Squad. This first appeared in July 2019 and is being reposted due to reader interest.