America's B-52 Bomber are Not Headed into Retirement Anytime Soon 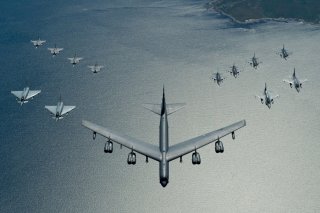 Here's What You Need to Remember: These upgrades will be tested on a total of 8 B-52 airframes, including two B-52s that had been sitting in an Arizona boneyard. The plan is to dedicate two airframes to each area targeted for upgrade: engines, radar, bomb bay improvements, and connectivity.

These most recent planned upgrades fall into four categories: engines, radar, communications, and weapon capacity. To finance these improvements, the U.S. Air Force has already spent $1.4 billion and is prepared to drop an additional $3.8 billion spread out over the next five years, with even more money potentially ready to be invested into the airframes after the five-year mark.

Once implemented, these upgrades will allow the B-52 platform to outlast several newer airframes, including the B-2 Spirit stealth bomber and the variable geometry B-1 Lancer. After those two airframes are retired sometime in the 2030s, the Air Force would presumably operate just two bombers, the B-21 Raider stealth bomber, and the B-52.

Another significant upgrade will install the Combat Network Communications Technology, or CONECT communications upgrade. The upgrade will completely overhaul and replace a number of various styles of band-aid solutions. This included laptop computers, connecting wires, and, strangely enough, Post-it notes. B-52s will get new digital color displays and improved onboard processes with greater computational power.