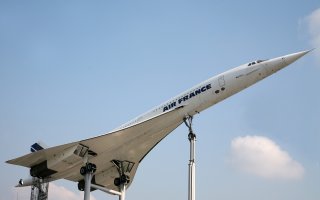 Here's What You Need to Know: Supersonic transport was not as revolutionary as had originally been envisioned.

The 1960s were a heady time for air transportation. Not only were jet airliners all the rage—so too were SSTs, or supersonic transports. The Soviet Union had been the first to enter into the supersonic jet airliner age with their massive—and problematic—Tu-144 design. The French-Anglo Concorde project would follow just a few months later, and benefited from a more mature design, leaving the United States in the lurch. Not wanting to give up ground to the Soviets nor the Europeans, both Lockheed and Boeing drew up schematics for two airframes that were intended to leave their rivals in the dust.

Supersonic transport was such a high priority, that the United States government promised both Lockheed and Boeing the United States would cover 75% of the research and development costs—if a viable supersonic design could be built. Both companies were well-positioned within the aerospace industry to build a winning design.

Boeing opted for a variable-geometry wing design that would in theory offer better handling characteristics at low speeds, like when taking off or landing, and benefit from less aerodynamic drag at supersonic speeds. Lockheed went with a more modest modified delta wing design, following their European rivals.

Though ambitious, Boeing’s wing design was ultimately proven to be workable by American workhorses like the Grumman F-14 Tomcat fighter aircraft, some of which still fly today. The problem with the design was scaling it from a two-seat fighter to a jet airliner with space for hundreds of passengers.

Though variable-sweep wing designs do offer some advantages over aircraft with fixed wings, they are notoriously heavy thanks to the pivot reinforcements required to keep the moving wings secure. Weight—and therefore fuel consumption was a persistent challenge, and a more Concorde-like delta wing design was settled upon. Engineering challenges aside, the other major hurdle to get over was common to all supersonic designs—the ear-splitting sonic boom they caused when crossing the sound barrier.

Ultimately the Concorde solved this problem to limiting speed while over land, letting the throttle go generally only during the transatlantic portion of Europe-North American flights. While this solved the sonic boom problem, particularly for British Concorde flyers, the loud boom all but doomed domestic American supersonic flight.

Ultimately supersonic transport was not as revolutionary as had originally been envisioned. Flying at Mach 2 and above created a number of engineering challenges that have yet to be surmounted—noisy sonic booms not least of all. Not for lack of trying though.