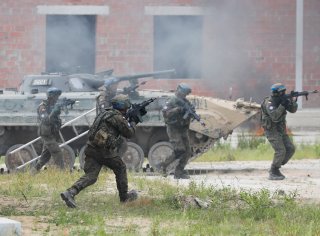 Here’s What You Need to Remember: We need a confident America operating with a sense of its own power and purpose.

This week US President Joe Biden faces the first big test of his administration’s global authority. America’s credibility as an ally is on the line, as is Biden’s ability to shape a shared NATO approach to Russia and to back up diplomacy with believable military options.

The challenge to American power comes from Russia’s President Vladimir Putin, a ruthless exponent of brinkmanship. The immediate focus is on Putin’s build-up of about 100,000 troops on the Ukraine border, poised for a potential invasion to counter Russia’s invention of a ‘threat’ from Kyiv.

The stakes are, in fact, bigger for Putin. He is reasserting a Russian claim to a sphere of influence over former states in the Soviet Union and Eastern Europe. If Biden concedes to Putin’s claim, American credibility and power fade, but nothing yet in Washington’s approach shows a resolute plan of action.

This should matter profoundly to Australia because, to be blunt, we are as reliant on American power as the Europeans are. And Chinese leader Xi Jinping is learning from Russian risk-taking. The strategies Putin uses to threaten Europe could well be used by Xi to threaten Taiwan, coerce Southeast Asia and weaken Australia, Japan and America’s Pacific allies.

It might be claimed that Biden’s first big international test was withdrawing from Afghanistan, but that was a self-inflicted wound. Biden himself determined when and how quickly it would happen. America’s actions were not shaped or constrained by allies, the Afghan government or the Taliban, or informed by concerns about what would happen in Kabul once the troops had left.

Russia’s threat to invade Ukraine, reassertion of Soviet-style dominance in Belarus and Kazakhstan, and attempts to weaken NATO’s position provide altogether a different challenge to Biden’s authority. Putin is challenging America’s capacity to lead an ever more fractured Europe in the defense of its own security interests.

Russia’s assertion of a role for itself as a global power is based on Putin’s allegation that the US broke a commitment made in 1990 at the time of the fall of the Berlin Wall not to expand NATO eastward, closer to the Soviet Union. The US secretary of state at the time, James Baker, told the New York Times this week, ‘I may have been a little bit forward on my skis on that’, but negotiations with Soviet leader Mikhail Gorbachev agreed that a unified Germany would be in NATO. A ban on states joining NATO was never agreed. Russia does, indeed, have legitimate security interests, but that doesn’t mean the interests of bordering countries are dispensable.

NATO now includes the Czech Republic, Hungary and Poland (1999); Bulgaria, Estonia, Latvia, Lithuania, Romania, Slovakia and Slovenia (2004); Albania and Croatia (2009); Montenegro (2017); and North Macedonia (2020). This has drawn NATO closer to Russia’s borders, but was the result of countries seeking security with the democratic West against an aggressive Moscow.

Putin’s contemporary claims that NATO missiles and military exercises threaten Russian security and that Moscow must control its ‘near abroad’ neighbors to ensure its own security simply divert attention from Russia’s annexation of Crimea in 2014 and proxy conflict in Ukraine’s eastern provinces.

So to the current military standoff on the Russia–Ukraine border. Maintaining 100,000 personnel on a war footing over winter is costly and can’t be sustained for long. I argued recently that Putin may have no intent to mount a full-scale invasion of western Ukraine. A hard-fought military occupation would rapidly bankrupt Russia and, over time, damage Putin’s domestic political standing. He has many options short of war including using cyberattacks to shut down Ukraine’s electricity grid. What’s clear is that the threat of Russian military action has spooked Biden, whose initial reaction was to tell Putin in their virtual summit in December, ‘If Russia further invades Ukraine, the United States and our European allies would respond with strong economic measures.’

Removing the threat of a US military response to Russian aggression gives Putin an option to press for further concessions. Even before negotiators arrived in Geneva for the first of three separate meetings with the Russians this week, Secretary of State Antony Blinken was foreshadowing possible US concessions including ‘arms control, where we have successfully engaged with Russia …; various confidence-building measures; greater transparency; risk reduction’.

Possible measures for negotiation include reducing NATO exercises and withdrawing US missiles from Poland. The American demand, Blinken stressed, was Russian reciprocity, in particular de-escalation of the Ukrainian situation. ‘It’ll be very difficult to make actual progress if Russia continues to escalate its military build-up and its inflammatory rhetoric.’

The possibility of reducing NATO exercises echoes former president Donald Trump’s unilateral concession to North Korea in 2018 to end key US – South Korean defensive exercises on the Korean peninsula. The North was delighted and offered nothing in return.

Rather than focusing on concessions, the US should look to make Putin’s goal of intimidation more difficult. Why not locate some US special forces trainers in Ukraine, as the US has done with Taiwan?

The Biden administration’s response to developments in Kazakhstan is even more puzzling. Let’s be clear: deploying thousands of Russian special forces to Almaty is not necessary for crowd control. This is a reassertion of Russian power over a ‘near abroad’ client state.

Yet the response of a senior Biden official at a White House press briefing was to say: ‘What is happening in Kazakhstan is not in any meaningful way about us.’ Once again Putin gets a pass from the White House for his bad behavior.

This week of negotiations may strengthen a US position as the reality hits that Russia is looking for opportunistic advantage. NATO can’t agree to rules about military exercising and positioning that weaken America’s ability to defend Europe. Nor will France and Germany step into that gap.

We need a confident America operating with a sense of its own power and purpose. Putin plays his weaker hand much more decisively. After one year in office, Biden needs a national security approach with less windy talk about the importance of allies. Yes, it’s great that ‘America is back’, but what exactly are we all going to do about these pushy dictators? The answer involves a harder focus on the sources of American strength and a greater willingness for collective military action, not to go to war but to deter risky adventurism by reminding authoritarian countries that there are necessary limits to their international bullying.

Peter Jennings is the executive director of ASPI and a former deputy secretary for strategy in the Defence Department.