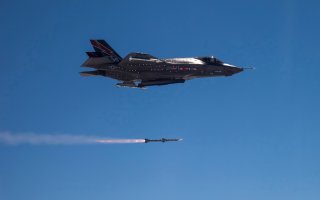 Here's What You Need to Know: It's unwise to underestimate the F-35.

On June 29, 2015, we saw what seemed like a fairly damning flight test report leaked to War Is Boring — where a F-35A test pilot was unable to triumph over a ’70s-era F-16D with two external tanks in a close-in mock dogfight.

In the report, the unnamed pilot noted the F-35’s lack of energy maneuverability and its restrictive flight control software led to it being unable to turn the tables against the Viper. He also criticized the aircraft’s lack of rearward visibility.

The story — as might be guessed — sent ripples through amateur and professional air warfare experts — with critics claiming that it is yet more evidence the aircraft is an expensive disaster. Proponents, meanwhile, lined up to defend the fighter.

The news story, picked up by other outlets, moved the F-35 Joint Program Office to rebut the report saying, “The F-35’s technology is designed to engage, shoot, and kill its enemy from long distances, not necessarily in visual ‘dogfighting’ situations.”

The JPO also noted that the aircraft involved, AF-2, was a flight test prototype and thus lacked its stealth coating, mission, sensor and weapon systems that would have afforded off-boresight missile shots.

Crucially, however, it did not dispute the authenticity of the report nor the test pilot’s comments about agility.

While the JPO rebuttal may have not addressed the elephant in the room as regarding the F-35’s unimpressive kinematics — it is correct that a one vs. one fight, with a non-production version F-35 stripped of its advanced sensors might well be an unrepresentative test.

Even in World War II, most kills by the top aces were achieved without the victim being aware they were being bounced, rather than the aerial melee seen in Top Gun and elsewhere.

With this in mind a curious, impartial mind might ask — how well might a F-35 do in a more operationally representative scenario? Beyond manufacturer’s slick marketing videos and pithy soundbites about “gamechanging” fifth-generation technology, it is difficult for an outsider to evaluate the F-35’s potential — especially in the air-to-air arena. Is it true revolution in air combat or an overpriced lemon?

Fortunately we now have a publicly available tool to take an informed look at least some of the claims made for the fighter.

To this, we turn to Command: Modern Air/Naval Operations — a hyper-realistic tactical PC simulation/war game which models sensors, stealth and other factors in great detail.

Having won plaudits from amateur and professionals alike in its detailed modelling, it’s set to move into the professional military and defense world through a co-operation agreement signed with BAE Systems. The game features a Jane’s style database of aircraft, ships, weapons, sensors and missiles from 1945 to 2020 with the whole world modeled and country-specific equipment lists.

Of course, simulations have been used before with the F-35 — with a famous RAND study concluding the jet would be “clubbed like baby seals.” However CMANO is a substantial advance on Harpoon-era simulations — with a more detailed, higher fidelity air warfare model.

For instance, it models the kinematic effects of aircraft losing energy dodging incoming missiles or SAMs — making salvos more important against highly-agile targets. The probability of a missile kill, or a “Pk,” is influenced by many factors — including seeker generations, range to target, agility of target aircraft, target aspect, countermeasures and pilot skill — making for a deep and complex simulation.

The A.I., too is clever enough to evade and try and “beam” incoming missiles — making for a highly realistic BVR simulation. In the older Harpoon, for example, missiles could be fired rearwards from fighters, the air combat modelling being far more abstracted.

While actual stealth performance is still highly classified, CMANO does provide a more detailed “educated guess” modelling of low-observable platforms like the F-35 — beyond just assuming they are “invisible” to the enemy in game terms. Frontal, side and rear visual, IR signatures and RCS (radar cross section) detection ranges are calculated — and the RCS is even split into two sets of radar bands. In this simulation, stealth is an advantage — but platforms can still be detected at close range.

In this test we are role-playing the “battlespace commander” with a top-down view of the air battle rather than the individual pilot — but in reality the F-35 is likely have this level of information provided to the pilots themselves in the cockpit — thanks to datalinks and sensor fusion.

How, then would it model the F-35 in an air combat scenario?

To find a plausible air combat scenario these days it is not necessary to look too far away from the headlines.

The scenario imagines a Baltic crisis gone hot in 2020 with British F-35Bs pressed into the air superiority/CAP mission. (In reality of course this would be more likely to be the Typhoon’s role.)

For the purposes of this test we will imagine a flight of four F-35Bs going up against four of Russia’s latest production 4.5 generation fighter — the fearsome Sukhoi Su-35S.

The F-35s are configured for long-range air superiority with four MBDA Meteor BVRAAMs each — and thus relying on stealth. As support, the F-35s have an E-3D AWACS and Rivet Joint. Meanwhile, the Su-35S have 10 AAMs each, comprising six AA-12 Adder As and four AA-11 Archers.

Both sides’ skills are set to equal, and ROEs are such that only contacts positively ID’d as hostile can be engaged. Both flights start at high altitude — 40,000 feet.

Some caveats must be understood before we let loose the dogs of virtual war.

1.) This is an unclassified consumer war game with weapon ranges/sensor data drawn from multiple open sources (and very informed guesses). Real-world missile ranges and sensor performance therefore could well be better. While the simulation has undeniably accurate — it will still have some gaps and discrepancies.

One oddity, for example, is the gunpod which was included as the standard F-35B LO air superiority load-out with four internal Meteor missiles. Is this a major factor? Probably not, given that in around 15 tests only one saw the F-35 get into a gunfight.

2.) Again, while the point of this test is to see how the F-35 performs in a more operationally representative test — it still omits a lot from a real-world air battle.

Support assets would include SAMs, surface ships and friendly fighters as well as other assets to feed into the electronic order of battle. In particular, the presence of friendly Rafales/Typhoons/Gripens as non-LO assets could allow tactics to distract and feint the enemy while the LO F-35s set up ambushes.

3.) This test is obviously being conducted by an amateur air power person. Those professionals who get paid to study, teach and train this subject full-time will no doubt be able to get much better results, more consistently.

4.) Rules of engagement may well be different for a real-world crisis — which short of World War II may see civil air traffic in or near the battlespace. This could aid (in terms of providing a clearer air picture) or hinder (if political restrictions meant visual ID rules were imposed) an information-age, LO fighter like the F-35.

Let’s then see what happens.

1.) Instantly the F-35s’ EW suites classify the bandits as Su-35s and tags them as hostile from around 350 nautical miles away — a huge advantage in deciding what to do next. This is particularly simple in this scenario, since we have no other contacts to worry about, but can take time with other platforms to build the air picture and finally ID a contact.

2.) With the contacts ID’d at this long range I can start coming up with a plan and can even “sort” contacts and assign wingmen to targets. The Flankers PESA radar is something to keep in mind, and I am aware the F-35 is not invisible — I therefore plan to send each pair of F-35s around to the side slightly to see if I can keep out of the radar and ambush them from the side.

I am keeping the F-35s’ radar off and relying on passive sensors to sneak up on the Flankers.

3.) Pincer move starts to take effect. Notice that the F-35s’ ESM suite is refining the position of the Su-35s — even though they have yet to enter the radar coverage of the AWACS.

4.) The Flankers are now advancing into the jaws of the trap. How long I can remain undetected is unknown, however.

5.) At this point — it looks like my gamble has paid off. The two southern F-35s have slipped past the Su-35s’ radar screen and are about in position to execute a turn and get into weapon range. Note also that thanks to datalinks from the AWACS the position information on the Flankers has firmed up.

6.) With my southern pair ready to fire, I aim to fire one Meteor each at max range to see if I can kill the southern bandit. Note also I am aiming to “crank” and turn to keep the threat at range to avoid closing to the merge.

7.) A useful new feature introduced in a recent patch to CMANO is “Weapons Release Authorization,” allowing the player to tailor missile salvos to the threat. With Meteor I can leave it at max range.