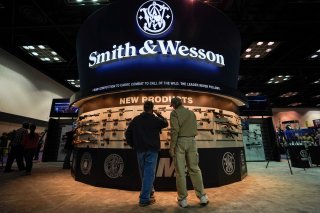 Here's What You Need To Remember: Even beyond the Magnum handguns, S&W has remained a force in the firearms industry. In the 1990s it introduced the Sigma line, the company’s first venture into synthetic materials including a high-strength polymer for the frame. In 2005 the company introduced another poly-framed pistol under the M&P line for “military and police.”

Even those who haven’t seen the movie know the now infamous line, “do you feel lucky punk?” Or at least they think they know the line. What Inspector “Dirty” Harry Callahan (Clint Eastwood) actually said—after explaining that he may (or may not) have lost count of the number of rounds fired in a shootout with bank robbers—was “You’ve got to ask yourself one question. Do I feel lucky? Well, do ya, punk?”

Perhaps even more famous than that exchange was the gun Dirty Harry carried—a .44 Magnum, which Harry explained was the “most powerful handgun in the world.” More accurately it was a Smith & Wesson Model 29, chambered in .44 Magnum.

After Colt, the Springfield, Massachusetts-based Smith & Wesson is arguably the most famous American firearms brand, and while the attention the company received from films such as Dirty Harry haven’t hurt the brand’s image, the company has been going strong for a nearly 150 years.

The Origins of S&W

Founded in 1852 by Horace Smith and Daniel B. Wesson, the company has developed some of the most widely used cartridges in the firearms world, while it is responsible for numerous iconic revolvers, pistols and rifles. The company had gun sales in excess of $773 million in 2017.

Much like Colt or the other pioneers of modern firearms development in the middle of the 19th century, Smith and Wesson began by considering not only the gun but the ammunition it would use. In 1852, the duo formed a partnership to manufacture a firearm that could fire a full self-contained cartridge.

Their first product was the Volcanic Pistol, which was released just two years later. The repeating pistol was notable in that it could be fired as quickly as the shooter could operate the lever. The name thus reportedly came from it having the force of an erupting volcano.

Nearly half a century later, the company released the Model 10 .38 Military & Police, an innovative firearm that featured a solid frame and hand ejector system. Along with such weapons such as the Colt M1911, which have been noted for their longevity, the Model 10 has remained in continuous production since 1899 with over six million being produced.

The Magnum Era and Beyond

Dirty Harry’s .44 Magnum wasn’t the original “hand cannon.” In 1935, Smith & Wesson introduced the Model 27, which was the first revolver chambered for the .357 Magnum round. Developed to give law enforcement a more powerful handgun, it started the “Magnum Era.”

Two decades later the Model 29 was released. It was originally available in two barrel lengths including 4- and 6 1/2 inches. Those models sold well, and a few years later a third barrel length of 8 3/8 was added. The demand for the guns actually decreased in the 1960s, but then skyrocketed after the release of Dirty Harry.

What is notable too is that the filmmakers had originally planned to have Harry carry the version with the shorter 4-inch barrel, but as that model wasn’t produced at the time Eastwood’s character carried versions of the handgun with the longer barrels. That fact likely made the weapon seem even more menacing and attributed to the sudden demand!

Of course in America bigger is always better and S&W supersized the concept in 2003 with the release of the .500 S&W Magnum, which has remained the biggest, heaviest, most-powerful factory-produced double action revolver in production. As The National Interest previously reported, “the Smith & Wesson 500 is the definition of overkill,” and described the weapon as akin to a cannon!

Even beyond the Magnum handguns, S&W has remained a force in the firearms industry. In the 1990s it introduced the Sigma line, the company’s first venture into synthetic materials including a high-strength polymer for the frame. In 2005 the company introduced another poly-framed pistol under the M&P line for “military and police.” So whether it is the classic S&W or the new space age materials any bad guy facing one may want to ask, “Do I feel lucky?”