America's Hypersonic Missile Is Put to the Test 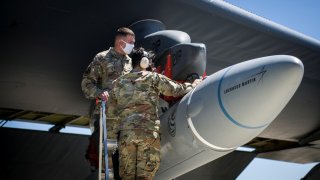 Here’s What You Need to Remember: Although gliders are unpowered, they have the potential to be extremely maneuverable in addition to flying at incredibly high speeds, two factors that significantly decrease the chance that they would be shot down by conventional air defense systems.

Though the Air-Launched Rapid Response Weapon lacks the speed and range of other hypersonic missile projects the Air Force is currently working on, its small size could allow it to arm a wide variety of fighter jets.

The ARRW program is not the only hypersonic missile program that the Air Force has in the works. Their Hypersonic Attack Cruise Missile is also in development, and is ultimately intended to breathe life into the flying branch’s aging Cold War-era B-52 bombers.

Much ink has been spilled over hypersonic missiles, with terms like air-breathing, boost-glide, and glide vehicle liberally sprinkled throughout reports and articles. But what is the difference between the Air Force’s two hypersonic missiles? It mostly boils down to size, range, and speed.

Hypersonic weapons like the ARRW are boost-glide type weapons. That is, they depend on a solid-fuel rocket to reach low-earth orbit much like a conventional intercontinental ballistic missile. Once at the appropriate altitude and hypersonic velocity, the glide vehicle separates from its booster rocket and glides to its target. Although gliders are unpowered, they have the potential to be extremely maneuverable in addition to flying at incredibly high speeds, two factors that significantly decrease the chance that they would be shot down by conventional air defense systems.

In contrast, weapons like the HACM are air-breathing and powered by an advanced high-speed scramjet-type engine. As with all engine designs—scramjet or otherwise—propulsion is contingent on atmospheric oxygen. This factor limits the altitude at which air-breathing hypersonic missiles like the HACM are able to fly, giving them a lower, and probably slower flight profile than boost-glide vehicles.

As boost-glide vehicles like the ARRW are rocket powered, they are also larger than air-breathing hypersonics like the HACM, an important logistical consideration. One Air Force official elaborated, saying that he could “put four ARRWs on a bomber, but I can put 20 HACMs on a bomber, if done right. Maybe more, if I have different pylon.”

Given the HACM’s more compact design, Air Force officials have also suggested that the missile could be launched from smaller fighter jet platforms like the F-15 and perhaps the F-35 or F-22 stealth platforms, potentially widening the scope of which airplanes can deliver hypersonic vehicles.

Ultimately the Air Force expects ARRW operational capability by 2022, an aggressive testing and production timeline that has already experienced testing snafus in addition to contending with the ongoing coronavirus pandemic.

Speaking about the Air Force’s hypersonic programs during a recent panel discussion, Air Force Brig. Gen. Heath A. Collins emphasized preparedness, saying, “We need to start planning today for what comes next. We’ve got to keep that pump primed, keep our subject matter experts primed and focused on our challenges, not filtering off to pursue something else that they find more exciting.”