America's Secret Plan To Hide Nukes Here (Can You Guess Where This Is?) 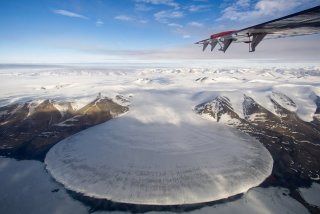 Here's What You Need to Know: In the middle of the Cold War, the U.S. Army developed a program to secretly deploy hundreds of nuclear-armed Minuteman ICBMs deep below Greenland’s ice cap.

One of the most well-known US military bases in the Arctic is Thule Air Base, in Greenland’s frigid northwest. Less well-known is the now-defunct Camp Century. Just 150 miles from Thule,  the area surrounding Camp Century is bitterly cold. Nighttime temperatures dip to -70°F and wind whips ice and snow through the air at 125 miles per hour.

Camp Century was opened in 1960 rather openly— the US Army released a short documentary film outlining the new construction techniques used to build the camp. Publicly at least, the camp was supposed to be used for conducting scientific research in the Arctic.

In reality, Camp Century was cover for a top-secret weapons project. The Danish government was opposed to housing nuclear weapons on their soil, and was thus not informed about Camp Century’s true purpose.

At Camp Century, engineers developed and improved subterranean Arctic building techniques. Modified tractors cut deep trenches nearly 30 feet into the ice. These trenches were then covered with steel semicylinders and topped with snow and ice that froze them firmly into place, providing shelter for the small underground city.

Transporting or airdropping diesel to fuel power generators would have been prohibitively expensive, and impossible during extreme weather conditions. The solution was to install a portable nuclear reactor that addressed all of Century’s electricity needs.

Building upon lessons learned from Camp Century, Project Iceworm was to be built on a massive scale. Iceworm would have been the world’s largest ICBM launch site— over 52,000 miles of tunnels cut deep into the Greenland ice sheet. Iceworm’s footprint would cover an about the size of the state of Indiana, and a whopping three times the size of the host country, Denmark.

600 modified “Iceman” Minuteman missiles would be transported underground on large road-sized tunnels via railcar to launching sites cut even deeper into the ice. The Iceman missiles would be constantly shifting to other sites to keep their exact locations a secret. The subterranean placement and a mandatory 4-mile distance between launch sites would offer a degree of protection and increase survivability in the event of an attack by the Soviet Union.

Greenland’s proximity to the Soviet Union would have given American Minuteman missiles an enormous strategic advantage. Greenland is much closer to Russia than the continental United States, and the Iceman ICBMs would have been able to strike almost any target within the Soviet Union at a moment’s notice. The sheer size of the planned Iceworm complex and the missile’s relatively wide distribution would help to ensure the United States’ second-strike capability and to strengthen the land-based leg of the US nuclear triad.

Alas, Project Iceworm was not practically feasible. Initial surveys had indicated that the Greenland ice sheet was rigid and ideal for tunneling. Later data gathered during the Camp Century experiment showed that the ice sheet was actually very elastic. Tunnels would have to be constantly maintained and be in danger of collapse every few years.

The extreme weather conditions also made steel building materials brittle and prone to cracking. Communications problems between the Pentagon and Camp Century were also an issue: sending or receiving messages during extreme weather events was problematic.

In the 1960s global warming was not a part of Pentagon strategic thinking. After shuttering Camp Century in 1967, The Army Corp of Engineers left behind thousands of gallons of radioactive water used to cool the portable reactor, and an unknown amount of sewage to be forever entombed in Greenland’s ice shelf.

In 1997, the Kingdom of Denmark conducted an inquiry into Camp Century, revealing the deceptive nature of the camp and the remaining hazardous waste enclosed in the ice.

Estimates from the scientific community predict that by 2090, the ice under Camp Century will begin to melt, releasing radioactive and human waste into the ocean. It remains to be decided if either the United States or Denmark, or perhaps even the now-autonomous Greenland will be responsible for cleanup.

Caleb Larson, a defense writer and journalist for the National Interest, holds a Master of Public Policy degree from the Willy Brandt School of Public Policy. He lives in Berlin and writes on US and Russian foreign and defense policy, German politics and culture.