Another North Korean Missile Test: Should You Care? 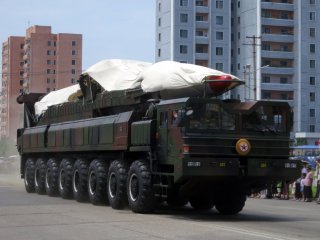 Here's What to Remember: Ballistic missiles are powered by a rocket and generally follow an arc-like trajectory, whereas a cruise missile is powered by a jet engine.

Only a handful of nations currently have nuclear-capable, long-range cruise missiles in their arsenals and as of this past weekend, North Korea could be added to that list. The state-run Korean Central News Agency announced on Monday that the North Korean military had successfully tested the newly-developed weapon—the first known testing activity in months.

The tests occurred this past Saturday and Sunday, and North Korea claimed the missiles hit their targets before falling into its territorial waters, the Associated Press reported.

It underscores the progress that the Hermit Kingdom has made to expand its military capabilities as its nuclear negotiations with the United States have remained largely stalled. The media reports that the missiles can hit targets up to 1,500 kilometers or 930 miles away. State media further published photos of the projectile being fired from a launcher truck as well as missiles traveling in the air.

Pyongyang has described the new missiles as being a "strategic weapon of great significance," while the Japanese have also said it is of "significant concerns." U.S. military has said the tests pose great threats to the international community.

What is also notable about the recent tests is that the UN Security Council sanctions specifically forbid North Korea from testing ballistic missiles, but as these tests were for cruise missiles they were not part of the banned weapons. The council considers the ballistic missiles to be far more momentous than cruise missiles, as the former can carry larger and more powerful payloads—while they have much longer range, and can fly faster.

"The development of a long-range cruise missile could pose additional challenges for South Korea's missile defenses," Joseph Dempsey, defense researcher at the International Institute for Strategic Studies, told the BBC on Monday. "A cruise missile doesn't have to follow a straight trajectory. Its flight plan may be programmed to avoid defenses or use terrain to reduce detection, but we still don't know exactly how the North Korean version navigates."

The international community has applied pressure on North Korea to abandon its nuclear arsenal—using both the carrot and the stick. Neither the promise of economic help nor the threat of sanctions has seemed to entice Pyongyang however. U.S.-led negotiations on the issue have been largely stalled since the collapse of the summit between North Korean leader Kim Jong-un and then-U.S. president Donald Trump in 2019.

Kim had called for major sanctions relief in exchange for dismantling an aging nuclear complex, which the U.S. rejected. This past March, North Korea then ended a yearlong pause in ballistic tests and fired two short-range missiles into the sea.

This past weekend's tests have also been seen as essentially low-level provocations that may be little more than to see what reaction these receive. However, the tests didn't result in any major headlines in South Korea nor did they make the front page of North Korea's state newspaper. China, North Korea's closest ally, also didn't seem to make much of the tests.

While not inconsequential, when a missile test occurs and the world hardly notices—especially given all the other problems—does it really matter? In this case, it probably does, but it is far down on the list of concerns.