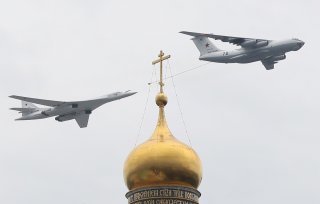 Here's What You Need To Remember: Will stealth prove more successful than the unstoppable 1930s bomber? Already the Pentagon says the F-35 will need escort to survive, and time will tell how much support the LRS-B will need to penetrate enemy air defenses.

"The bomber will always get through," declared British Prime Minister Stanley Baldwin in November 1932.

As the United States prepares to spend more than $60 billion on the new B-21 (formerly known simply as the Long Range Strike Bomber), it is worth recalling that in the early 1930s, many people believed there was no defense against bombers. In the years since the Kaiser's Gotha aircraft struck London in 1917, bombers had steadily improved in speed, range and payload. Even as air forces deployed monoplane twin-engine bombers, they continued to fly biplane fighters not much different from the aircraft used by the Red Baron and Eddie Rickenbacker in World War I. Strange as it sounds, early 1930s monoplane bombers such as the U.S. B-10 were actually faster than the biplane fighters that would have tried to intercept them. Today, it would be like a propeller-driven Russian Yak-9 from 1944 trying to shoot down a B-2 stealth bomber.

And so European leaders were gripped by apocalyptic visions of fleets of bombers pulverizing cities with bombs, or asphyxiating populations with poison gas. These fears were given intellectual credence by Giulio Douhet, the Italian airpower theorist who predicted that future wars would be decided by strategic bombing of cities, that pounded civilian morale until a demoralized public compelled their leaders to make peace. This nightmare became visual in 1936 film Things to Come, written by H.G. Wells, in which the first fifteen minutes depict a city being devastated by a night bomber raid.

Some of this was motivated by prejudice; British leaders feared that the working classes lacked the stiff upper lip of their social betters to endure bombing. In the 1930s, bombers also enjoyed the awe-inspiring image of a cutting-edge, high-tech but largely untested weapon whose capabilities were perceived more through propaganda than actual combat.

In fact, the "bomber will get always through" was the pre–World War II equivalent of modern stealth aircraft. Like the unstoppable bomber, the mystique of stealth since the First Iraq War of 1990 has made stealthy aircraft almost supernatural, capable of materializing over a target and destroying it before the defender can spot and intercept them.

Also like the bomber bogeyman almost a century ago, stealth represents a belief in the technological triumph of the offense. Of course, stealth can also be used defensively, as when stealth interceptors ambush attacking bombers. But the aura of stealth is offense, the implied threat being that if China or Russia or Iran make trouble, U.S. aircraft will appear like ghosts over Shanghai or Sevastopol or Tehran, leaving devastation in their wake.

We really don't know how stealth will work out. It is the major selling point of the F-35 and of the Long Range Strike Bomber, though it may not work for the F-35—and we won't know about the LRS-B until we've spent all those billions.

But we can say what happened to the "bomber will always get through." It didn't. That became clear three months into World War II, when twenty-two Royal Air Force Wellington bombers struck the German port of Wilhelmshaven on December 18, 1939. Some twelve bombers—more than half of the force—were shot down. Luftwaffe bombers fared little better when attacking beyond the range of their short-legged Me-109 fighter escorts during the Battle of Britain.

The real test of whether the bomber could be stopped was the U.S. daylight bombing offensive over Germany, which was based on the stubborn American belief that massed formations of heavily armed B-17 and B-24 bombers could fly across Western Europe to pulverize German industry. And in 1943, U.S. bombers could always get through—if they were willing to suffer 20 percent losses in a single raid, as happened to Eighth Air Force B-17s attacking Schweinfurt in October 1943. What eventually saved the American bomber offensive was the advent of long-range P-51 Mustang fighter escorts.

Even when bombers could get through, the results did not match the promises of the 1930s. German morale did not buckle under around-the-clock saturation bombing; neither did Britain, or North Vietnam.

Will stealth prove more successful than the unstoppable 1930s bomber? Already the Pentagon says the F-35 will need escort to survive, and time will tell how much support the LRS-B will need to penetrate enemy air defenses.