Are the Chinese Gearing Up for War in the Taiwan Strait? 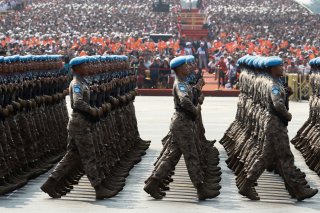 Here's What You Need to Remember: Although Beijing is undoubtedly committed to further widening the military imbalance in the Taiwan Strait and to deploying assets that can delay or even prevent a U.S. intervention, China’s ability to prosecute a quick invasion of Taiwan at acceptable cost remains, by most yardsticks, too much of an uncertainty.

Since the beginning of 2020, China’s signaling of its purported intentions toward Taiwan has taken an unmistakable turn for the belligerent, with editorials clamoring for military action and a substantial increase in People’s Liberation Army (PLA) activity around the democratic island-nation. Recently, PLA aircraft have frequently cut into Taiwan’s Air Defense Identification Zone (ADIZ) and crossed a median line in the Taiwan Strait that, although unofficial, had nevertheless served to reduce the risks of collision and miscalculation over the years. With Xi Jinping’s adjuring the PLA to “prepare for war,” commentaries in state-run media putting Taipei on notice, and the deployment of new DF-17 missile units and advanced stealth aircraft near Taiwan, it appears that war in the Taiwan Strait is just around the corner. Global media have weighed in on the issue, with several alarmist articles appearing in recent weeks.

Martial signaling notwithstanding, the likelihood that Beijing is about to embark on a major military endeavor in the Taiwan Strait remains fairly low. Most assessments indicate that despite quantitative and qualitative improvements in recent years, the PLA still does not have sufficient amphibious capabilities to launch an assault against Taiwan. Other variables complicate Beijing’s calculations, including uncertainty, despite ongoing advances in the PLA’s anti-access/area-denial (A2/AD) capabilities, over a potential involvement by the U.S. in a Taiwan contingency, as well as the potentially high losses involved in amphibious operations in the Taiwan Strait, for which eventuality the Taiwanese military has been preparing for decades.

Although Beijing is undoubtedly committed to further widening the military imbalance in the Taiwan Strait and to deploying assets that can delay or even prevent a U.S. intervention, China’s ability to prosecute a quick invasion of Taiwan at acceptable cost remains, by most yardsticks, too much of an uncertainty. In fact, no such thing may even be possible. As the Department of Defense’s 2020 report to Congress indicates, China’s Joint Island Landing Campaign (登岛战役)—the most prominent of PLA plans for a major military campaign against Taiwan—“envisions a complex operation relying on coordinated, interlocking campaigns for logistics, air, and naval support, and EW [electronic warfare]. The objective would be to break through or circumvent shore defenses, establish and build a beachhead, transport personnel and materiel to designated landing sites in the north or south of Taiwan’s western coastline, and launch attacks to seize and occupy key targets or the entire island.”

It continues: Large-scale amphibious invasion is one of the most complicated and difficult military operations. Success depends upon air and maritime superiority, the rapid buildup and sustainment of supplies onshore, and uninterrupted support. An attempt to invade Taiwan would likely strain China’s armed forces and invite international intervention. These stresses, combined with China’s combat force attrition and the complexity of urban warfare and counterinsurgency, even assuming a successful landing and breakout, make an amphibious invasion of Taiwan a significant political and military risk.

Warnings by Xi, bellicose editorials by retired PLA officers, and military exercises ostensibly aimed at Taiwan, therefore, need to be assessed for their more immediate value to the CCP. And those lie in the realm of propaganda, aimed chiefly at the Chinese public. The shift to a more confrontational strategy vis-à-vis Taiwan reflects a deep frustration in Beijing over Taiwan since 2016, when Tsai Ing-wen of the Taiwan-centric Democratic Progressive Party (DPP) was elected. Beijing’s hopes for “peaceful unification” with Taiwan, which seemed within reach during the eight-year rule (2008-2016) under the Beijing-friendly Ma Ying-jeou of the Kuomintang (KMT), culminating in a historic, albeit purely symbolic, summit in Singapore in 2015, have completely collapsed. Efforts to “buy” the Taiwanese through various economic incentives and elite capture, accompanied by sustained efforts to isolate Taiwan internationally, have only succeeded in delivering a Taiwanese public that is increasingly committed to its democracy and way of life. The recent crisis in Hong Kong has only served to deepen that sentiment for independence and completely negated the appeal, such as it was, of the “one country, two systems” formula, which remains the only offer on the table.

The re-election of President Tsai in the January 2020 election with a record number of votes, followed by Taiwan’s successful handling of the COVID-19 pandemic and bourgeoning ties with the international community, have driven home for Beijing the hard reality that its longstanding strategy has failed.  Thus, as delegations of senior U.S. officials, former Japanese prime ministers and Czech representatives defy Beijing’s warnings and interact with Taiwan, and with a series of U.S. arms sales announcements in the past year, Beijing has been compelled to react. Threats of military action, underscored by intense PLA activity, have been used to signal Beijing’s displeasure, with the hope, perhaps, that such behavior would have a psychological effect on the Taiwanese public (the effect has been the exact opposite, however). A secondary consideration has been the necessity of responding to a more visible presence by the U.S. military in the area, which has reacted to ramped up PLA activity with passages of its own, creating an escalatory cycle of action and counteraction.

A more important consideration for the CCP is the need to demonstrate that it and it alone has the ability to dictate the outcome of the dispute in the Taiwan Strait. Undoubtedly cognizant of the fact that its Taiwan strategy has failed, for ideological reasons the CCP cannot admit to the Chinese public that it is so. Xi’s style simply cannot countenance such an admission. The strategy, therefore, is to continue to insist, against all the evidence to the contrary, the a small clique of Taiwan “separatists” and their foreign allies are responsible for the standoff, and to demonstrate that Beijing can, if it so chooses, resolve the matter once and for all. The propaganda maintains that China is acting defensively—due to unreasonable forces that continue defy historical trends, the CCP is compelled to threaten force to defend reason and the country’s honor. In this context, an increasingly active military around Taiwan, and the accompanying signaling in state-controlled media, are arguably more part of psychological warfare and propaganda effort than preparations for imminent all-out war against a stubborn neighbor.

All of this comes with a major caveat, however, as it is predicated on rational decision making in Beijing (Allison and Zelikow’s classic Essence of Decision remains an indispensable guide on this issue). In other words, it assumes that the CCP calculates and weighs the costs and benefits of its actions in a way that militates against reckless behavior. But what if that isn’t the case? Given the closed political system in China, tight controls on the media and heavy censorship, it is difficult to assess the current levels of instability in China that may exist in the midst of the COVID-19 pandemic which, if serious enough, could encourage an insecure CCP to seek external distractions—along the border with India, in the South China Sea or, as the mother of all rallying points for Chinese nationalists, the unfinished business of Taiwan.

For this reason, Taiwan and its allies must nevertheless prepare against the possibility, however slim for the foreseeable future, that China is indeed preparing to launch an invasion of Taiwan (likelier scenarios include a limited amphibious assault against Taiwan’s outlying islands or assets in the South China Sea). However unlikely an attempt to seize Taiwan may be at the moment, Taiwan cannot afford to be sleeping at the wheel, as the cost of unpreparedness would have catastrophic repercussions for the island-nation and its people. A CCP which feels that its legitimacy may be compromised by an underperforming economy, or an embattled Xi who needs to counter a factional challenge stemming from an increasingly unfavorable international environment which some have blamed on his hubris, could conceivably seek to inflame nationalistic sentiment as a way to redirect discontent and sideline internal adversaries. In such a scenario, a regime could be tempted to embark on behavior that, to outsiders, seems irrational and bound to be counterproductive.

There is, however, historical precedent for this, chiefly the case of Japan on the eve of World War II, which, while well aware that it could not possibly win a protracted war against the U.S., nevertheless launched attacks against Pearl Harbor, hoping against hope for a resounding knock-out that would encourage Washington to seek negotiations on Japanese terms. U.S. failure to conceive of such an attack, let alone to prepare against it, stemmed from an inability to understand the psychological pressures, fear and honor, that underpinned decision making in Tokyo. North Korea provides another example of a regime that, when the status quo has become untenable, has shown a proclivity to engage in what may appear like irrational and highly risky behavior.  Under certain conditions, Xi and the CCP could also feel that their honor is being unacceptably undermined by a succession of developments favoring Taiwan. Having sold the Chinese people a series of lies as to their ability to control the situation, and fearing a nationalistic backlash agains them should they “lose” Taiwan, the leadership could conclude that action is necessary before it is too late. It is quite possible that in such a scenario, an unusually risk-prone regime in Beijing could seek a similar bolt from the blue against Taiwan as Japan did against U.S. naval forces in 1941, especially if it convinces itself that the U.S. is unwilling to risk hostilities with China over Taiwan or is too distracted, perhaps due to a constitutional crisis over the outcome of the November elections, to orchestrate a coherent response.