Are First Ammendment Rights Being Threatened During Recent Protests? 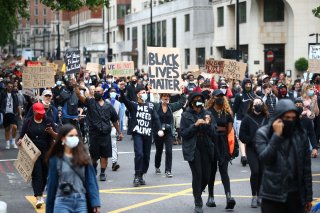 When Americans think of journalists attacked, arrested or imprisoned while doing their job, they think of it happening in distant lands – in places like Russia, Syria, Afghanistan, El Salvador and Mexico.

Freedom of speech and freedom of the press are so ingrained in the American consciousness, citizens may have been lulled into thinking that these acts of intimidation couldn’t possibly happen on American soil.

And then they did.

On May 29, police in Minnesota arrested a CNN journalist who was covering the Minneapolis protests, leading him and three crew members away in handcuffs.

This wasn’t a one-off.

Between May 29 and May 31, there were more than 100 reported incidents of journalists being “injured, assaulted or harassed by either protesters or police officers.”

These reports are shocking and chilling, compounded by the fact that Americans rarely see this happen on American soil – whether on the news, on fictional TV shows or in movies.

I’ve studied the image of the journalist in popular culture for more than 30 years, documenting how the public forms its impressions of journalism through movies, television and novels.

For almost a century, popular culture has perpetuated the notion that only journalists working in foreign countries were in danger. We saw this in World War II films like “Berlin Correspondent” and “Comrade X,” in which foreign correspondents escaped brushes with death to inform the public.

There’s the journalist blown up while covering a nuclear submarine disaster in “The Bedford Incident,” and the photojournalist who commits suicide as Indonesian police close in on her in “The Year of Living Dangerously.”

In “Under Fire,” journalists are shot in Nicaragua by hostile troops, while in “Salvador,” one photojournalist is killed while covering an aerial raid, and Salvadoran troops torture another.

Then there are the journalists who barely escape death but leave their sources behind to suffer at the hands of the Khmer Rouge in “The Killing Fields.”

Real-life examples of journalists killed around the world give credence to these images, and Americans such as Wall Street Journal reporter Daniel Pearl and video reporter James Foley were killed while covering stories for the American news media in Pakistan and Syria, respectively.

In films set in America, journalists do find themselves in trouble. In “The Turning Point” and “The Parallex View,” investigative reporters are killed, while in “The Pelican Brief” and “State of Play” journalists narrowly escape death.

But these domestic journalists weren’t killed by law enforcement or the military but by sinister people in the government or as a result of business cabals or organized crime. Television, meanwhile, is saturated with images of cops as heroes.

American studies scholar Jerome de Groot has written about how novels, movies and television shows offer “powerful models and paradigms” for understanding our shared past.

So it can be confusing and disturbing to see images that upend preconceived notions about American journalists – that overseas, they might be exposed, but here in America, they’ll be protected by the law.

The illusion has been shattered. As Dan Shelley, executive director of the Radio Television Digital News Association explained, the police “started deliberately attacking journalists who were clearly identifiable and identifying themselves as journalists. … To be a journalist in the Twin Cities last night, particularly in Minneapolis, if you were just arrested, you were lucky.”

Some have blamed President Donald Trump’s broadsides against “fake news” and his rhetoric castigating the media as the “enemies of the people.” Others say many media outlets have ceded their role as serious news gatherers in favor of stoking sensationalism and division for profit, which has led to plummeting trust.

And though Trump has been notably virulent in his attacks on the news media, past presidents – including Barack Obama – haven’t always been champions of freedom of the press. Like Trump, Obama wanted to control the narrative, and during his two terms he used the 1917 Espionage Act to crack down on journalists and their sources by prosecuting more leakers and whistleblowers than all previous administrations combined.

No matter the cause, I won’t be surprised if the movies catch up to the current moment, and films start to feature besieged journalists on American soil.

Their biggest threat won’t be a foreign power or a corporation or a mobster.

It’ll be their own government.