Are Housewives Turing Against Donald Trump? 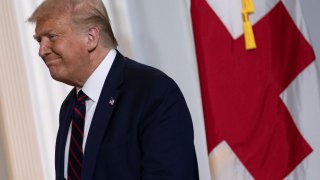 Last week, one of President Trump’s tweets got him in trouble again, at least with a few writers at The Washington Post. The tweet was in response to Joe Biden’s housing plan, and here’s what Trump wrote, “The Suburban Housewives of America must read this article. Biden will destroy your neighborhood and your American Dream. I will preserve it, and make it even better!” Karen Tumulty of the Post pounced, “In what century is President Trump living? Or perhaps the better question: In what century does he believe American women are?”

We have no polls to show whether women were offended by the use of the term “housewife,” but we do know that most Americans wish the president would stop tweeting. In a new Economist/YouGov online poll, 60 percent said the way Donald Trump uses Twitter is inappropriate for the president of the United States. Sixty-five percent of women compared to 54 percent of men said it was inappropriate. A third of Republicans, 34 percent, thought it was, too.

“Housewife” wasn’t a pejorative term in the past, and it has a storied history in the annals of modern campaigns. The great psephologist Richard Scammon and journalist Ben Wattenberg, both of whom had long associations with AEI, made the “Dayton Housewife” famous in their 1970 book, The Real Majority. She was from the middle of the country, was middle-class, had a mid-level education and a middle income, and she was thought to hold the key to future elections. She became so famous with the publication of the book that one of the networks sent a team out to find the mythical housewife, and she appeared on one of the popular late night talk shows to discuss her views on politics.

Every four years, pundits anoint a new group as the election’s key. The Democratic pollster Celinda Lake, who has done pioneering work on women’s views (in the past occasionally with pollster and White House counselor Kellyanne Conway), is credited with several popular ones from the past including NASCAR dads and waitress moms. In other elections, there have been soccer moms, security moms, and office park dads, to name just a few. Democratic pollster Mark Mellman once said these clever coinages are almost always poorly defined, and “almost never determine the outcome of elections.”

Of course, the women’s vote isn’t monolithic, but Trump is clearly in trouble with large segments of it. In the latest NBC News/Wall Street Journal poll, Joe Biden had a 23-point lead over Donald Trump among women, 58 to 35 percent, while Trump had a two-point lead among men, 45 to 43 percent. Among white women — an important group this year — Biden has a five-point lead. (For comparison, Trump leads Biden by 20 points among white men).

These polls indicate a change since 2016. In the network consortium’s 2016 exit poll, 52 percent of white women voted for Trump and 43 percent for Hillary Clinton. A slight majority (51 percent) of white women with a college degree voted for Clinton in 2016, while white women without a college degree voted solidly for Trump (61 percent). I’m keeping my eye on them as recent polls have suggested they are less enamored of Trump that they were four years ago. Overall, Trump has lost considerable ground among key groups of women voters during his presidency.

While we don’t have a good candidate for the key voter in 2020, women, who are a majority of the electorate and have voted at higher rates than men since 1980, will be very important.

This article by Karlyn Bowman first appeared in AEIdeas on July 31, 2020.