Are Hypersonic Missiles the Ultimate Threat to Aircraft Carriers? 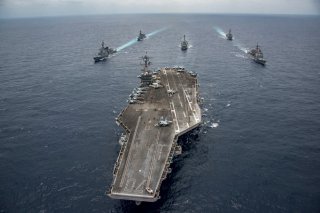 Here's What You Need to Remember: Hitting the specific location of a carrier at such distance, even with a hypersonic weapon, wouldn't be the easiest thing to pull off. Current ballistic missiles that can achieve hypersonic speed follow a predictable flight path, but a concern is that these missiles could be able to maneuver in unexpected ways.

The Stalker Zone website recently explored a hypothetical strike on a large carrier – in this case, the U.S. Navy's USS George H. W. Bush, which has a displacement of 97,000 tons and a length of 333 meters. The carrier, which has a crew of 3,200 plus 2,500 military personnel that make up the aviation wing, is quite a sizeable target for any weapon, but getting past its air defenses including its screen of destroyers would be no easy task.

"Even if the carrier can stay afloat for the first moments after the strike, the potential of its aircraft wing will be reduced to zero by the damage caused to the deck," the Stalker Zone noted. "In addition, such a strike can lead to the defeat of at least one of the two naval Westinghouse A4W reactors. The total capacity of these reactors is 1,100 MW. A missile with a half-ton warhead moving at high speed can not only destroy the coolant circulation circuits but also lead to the explosion of the nuclear reactors themselves during their active operation when an aircraft carrier performs a combat operation."

Such a strike from even a single hypersonic "Kinshal" missile could be enough to completely destroy an aircraft carrier but would have the potential to create a chain reaction that could take out an entire carrier strike group!

Hitting the specific location of a carrier at such distance, even with a hypersonic weapon, wouldn't be the easiest thing to pull off. Current ballistic missiles that can achieve hypersonic speed follow a predictable flight path, but a concern is that these missiles could be able to maneuver in unexpected ways.