Are Smaller Aircraft Carriers the Way Of the Future? 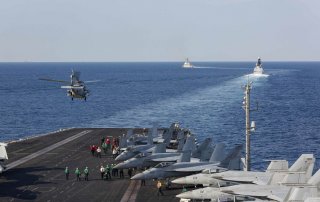 Here's What You Need to Remember: While cheaper, light carriers are less capable than supercarriers are. A smaller flattop could embark as many as 20 F-35s, compared to the roughly 40 strike fighters that routinely embark on a supercarrier.

The consensus could be … more giant, nuclear-powered aircraft carriers. Or the Pentagon could double down on a concept that has become popular in recent years. Small, non-nuclear “light carriers.”

The Navy in early 2020 launched a formal study of aviation-ship requirements after the current order for five Ford-class supercarriers. Ford already is in commission. The fifth and final vessel in the batch should enter service around 2032.

The Navy amid budgetary uncertainty repeatedly has delayed the most recent edition of its annual shipbuilding plan.

Broadly speaking, the Navy’s main options are to buy more Fords at a cost of $13-billion apiece, develop a new design or, for $4 billion apiece, acquire additional assault ships of the America class and deploy them as light carriers.

Alternatively, the fleet could deeply cut the current force of 11 supercarriers without replacing the ships it decommissions, although that seems the least likely of the options. Congress has mandated a 12-carrier fleet but routinely grants the Navy waivers to operate just 11 flattops.

Flattening budgets and a possible new fleet design could inform the carrier studies. In a move that should surprise no one, the U.S. Navy has walked back its four-year-old plan to expand its front-line fleet from today’s 294 vessels to 355 some time in the 2030s.

Top Navy leaders cited in their decision the high cost of the bigger fleet as well as the accelerating effort to add robotic vessels to the force. Service leaders estimated it would cost $25 billion a year every year through 2049 to grow the fleet by 60 manned vessels. That's roughly double what the service historically has spent.

Small unmanned warships could be cheaper than manned ships are, but under current conventions robotic vessels don’t count in the Navy’s tally of “battle force” ships.

“Will we get to 355-ships?” Vice Chief of Naval Operations Adm. Robert Burke said in October 2019. “I think with today’s fiscal situation, where the Navy’s top line is right now, we can keep around 305 to 310 ships whole, properly manned, properly maintained, properly equipped and properly ready.”

Consistent with this budgetary pessimism, the Navy in its 2021 budget request asked Congress for just eight battle-force ships, down from dozen or more in previous years.

Modly’s ambition could prove fleeting. As acting secretary, he’s scheduled to step down when the U.S. Senate confirms his replacement in coming months.

Seemingly the most likely force-structure outcome for the Navy is somewhat more modest growth to a fleet smaller than 355 front-line ships. The question is how many carriers the Navy includes in its ship mix, and what capabilities those carriers possess.

Under current planning, the Navy anticipates buying no fewer than 10 Fords in order to eventually grow the carrier fleet to 12 Nimitz- and Ford-class vessels around the year 2065.

Defense Secretary Mark Esper has cast doubt on that plan. “This discussion often comes down to a binary: Is it zero or 12?” Esper said. “First of all, I don't know. I think carriers are very important. I think they demonstrate American power, American prestige. They get people's attention. They are a great deterrent. They give us great capability.”

While cheaper, light carriers are less capable than supercarriers are. A smaller flattop could embark as many as 20 F-35s, compared to the roughly 40 strike fighters that routinely embark on a supercarrier.

A supercarrier with its larger size and nuclear powerplant possesses endurance that a conventionally-powered assault ship never could match. Likewise, the bigger supercarriers can embark specialist aircraft such as radar-early-warning planes, radar-jamming planes and tanker drones that are too big for a light carrier to handle.

A light carrier "would not be a viable option for the eventual carrier force unless displaced capabilities were reassigned to new aircraft or platforms in the joint force, which would be costly," California think-tank RAND pointed out.

A compromise could involve the Navy slightly reducing its supercarrier fleet while buying more assault ships and more frequently operating them as light carriers with larger numbers of F-35s.

"While the amphibious assault ship will never replace the aircraft carrier, it can be complementary, if employed in imaginative ways," the Corps stated.

David Axe served as Defense Editor of the National Interest. He is the author of the graphic novels War Fix, War Is Boring and Machete Squad. This article appeared a few years ago and is being reposted due to reader interest.