Are Tanks Past Their Prime? 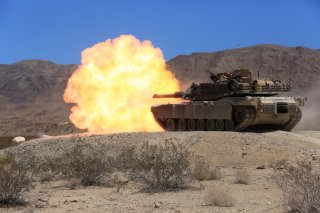 Here’s What You Need to Remember: The Marines are rushing to arm the HIMARS launchers and other vehicles with new anti-ship missiles. The Corps also is buying ground-launched Tomahawk cruise missiles with special seekers for targeting ships.

In their place, the Corps would add scores of rocket launchers, new high-tech communications systems, and lots and lots of drones.

If lawmakers approve it, the proposal could result in the most sweeping change in decades to the Marine Corps force structure. The service would cut 12,000 people from its ranks, shrinking from today’s roughly 220,000 active and reserve Marines to around 208,000.

“The Marine Corps is not optimized to meet the demands of the National Defense Strategy,” Maj. Joshua Benson, a spokesman for Marine Corps Combat Development Command, told USNI News.

“Additionally, the Corps will reduce the number of infantry battalions from 24 to 21; artillery cannon batteries from 21 to five; amphibious vehicle companies from six to four; and reduce tiltrotor, attack and heavy-lift squadrons,” Benson said.

On the other hand, the demand for long-range rockets, drones, and communications could spike. With the money the Marines save from cutting tanks and infantry, Berger wants to triple the number of wheeled High-Mobility Artillery Rocket System launchers and double the number of drone squadrons.