Are These Shirts The Next Far-Right Symbol? 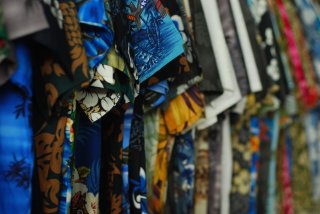 Members of the loosely organized far-right “boogaloo” movement are making the rounds in the news. They’re gaining notoriety not for being linked to domestic acts of terrorism in the United States, but for their penchant for Hawaiian shirts.

Their fondness for aloha-infused militia looks has caught the interest of journalists and prominent news outlets. This mix of street fashions has become an identifying characteristic of boogaloo boys or bois.

The boogaloo is a fragmented community that began as a firearms board on 4chan and then blossomed on Facebook. The term boogaloo comes from the 1980s movie Breakin’ 2: Electric Boogaloo. More recently the term has been used to refer to anti-government sentiment, civil unrest and the desire for a second civil war.

The boogaloo community includes far-right, pro-gun, anti-government libertarians spanning a wide spectrum of ideologies including white supremacy, anarchy and a range of conspiracy theories. The boogaloo are, however, unified by violent militant attitudes and terrorist tendencies. They are also savvy when it comes to managing their public image and hiding their actions.

As a scholar studying the intersections of fashion, visual culture and social issues, the boogaloo’s adoption of Hawaiian shirts troubles me. Hawaiian shirts have historically symbolized place, consumerism, colonialist oppression and the opposition to conventional culture, and have been an alternative to formal wear.

On the one hand, we have the problematic association of Hawaiian prints with laid-back lifestyles. On the other hand, Indigenous Hawaiians perceive these motifs as stereotyping their authentic culture.

Hawaiian shirts’ meanings play out in surprising ways within the far-right’s efforts to make their ideology mainstream. For mainstream onlookers, Hawaiian shirts worn with tactical gear may fool them about the boogaloo’s true colours. The common association of Hawaiian prints with relaxed easy-going attitudes is misguided here. The boogaloo are bent on violence and hope for a second civil war to advance their agenda.

Called aloha shirts in Hawaii, these garments were reclaimed from their colonialist implications by Indigenous Hawaiian designers. Since the mid-1980s, designers like Sig Zane have injected aloha prints with authentic Indigenous energy.

Early Hawaiian shirts featured Asian motifs, which were replaced by local motifs in the 1930s. With this shift the shirts started embodying “aloha,” meaning respect for all animated or inanimate beings.

For Hawaiians, and especially Indigenous Hawaiians, the boogaloo’s co-opting of Hawaiian shirts is outrageous. In today’s Hawaii, aloha shirts symbolize tolerance and Hawaiians don’t want it associated with the racism of the boogaloo.

Although the boogaloo movement seems to pop up in 2019, its roots are entrenched in online fringe politics. Civil rights advocacy groups and researchers have linked the boogaloo to white supremacist groups as early as 2013. These online communities are a natural evolution from neo-Nazi and militant white nationalist organizations.

Accessorizing fatigues with Hawaiian shirts is a styling attempt by far-right groups to manage their public image. The clash of camo or tactical fabrics and aloha prints is certainly striking. This is especially true against urban backdrops of cityscapes or protester and police outfits.

It isn’t new for white supremacists to co-opt conformity dress, but incorporating Hawaiian shirts opens new avenues for political posturing. A similar strategy was employed in 2017 by white supremacist protesters in Charlottesville, Va. They sported polo shirts and khakis, in an attempt to lend a sense of legitimacy to their cause.

What do Hawaiian shirts mean to the far-right?

Perhaps Hawaiian shirts, fatigues and assault weapons synthesize the disparity of beliefs among the loosely organized boogaloo. The colourful elements in Hawaiian prints could suggest this unity in a perceived diversity. Although these fringe groups share a belief in an upcoming race war, they differ on many other topics.

Some commentators have suggested that the Hawaiian shirt motifs speak to the boogaloo’s online origins. After all, they were a meme before becoming a somewhat coherent virtual and then physical organization. This inside joke, copy-and-paste esthetic of memes and GIFs is shared by boogaloos in social media.

Integrating Hawaiian prints into paramilitary outfits is a calculated effort by far-right affiliates. They want to get noticed in a crowded political space. Thus, the boogaloos’ seemingly innocent outfits are about calling attention to themselves, while simultaneously masking their violent intentions.

Don’t be tricked by the kitschy cheerfulness of their Hawaiian prints. There is nothing as far from the aloha spirit as the hate championed by the boogaloo.

Henry Navarro Delgado is an Associate Professor of Fashion at Ryerson University.