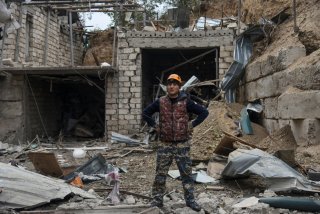 Modern conflicts are increasingly accompanied by online shadow wars in which the protagonists fight for narrative control. In our new report for ASPI’s International Cyber Policy Centre, we have documented some of the online activities associated with the latest outbreak of hostilities between Armenia and Azerbaijan over the disputed territory of Nagorno-Karabakh.

First, a few caveats. We focused primarily on English-language activity taking place on Twitter and have not set out to provide a comprehensive analysis of the complex social media activity connected to the conflict that is taking place across multiple platforms and in a multitude of languages.

We have not sought to fact-check or verify any of the content or to perform an in-depth content analysis. And we are in no way seeking to delegitimise the authentic social media conversations taking place on this highly contentious issue.

However, since social media content moderators are actively seeking out and removing inauthentic behaviour, evidence of these kinds of online battles is often swiftly removed. This is the right and responsible course of action, but it has implications for researchers who are later seeking to understand the dynamics of the information battle and the conflict more broadly. If rapid snapshots aren’t captured at the time, much of that data will be lost.

The goal of our report was therefore to document the dynamics of the social media activity linked to the conflict over the course of a few days, including both authentic coordinated action and suspicious or potentially inauthentic activity.

What we found was a highly complex picture involving not just the two combatants but also their allies. For example, Turkish and Pakistani accounts have been actively supporting Azerbaijan in the fight for narrative control, while Indian accounts have been backing Armenia.

This reflects the situation in the real world. Turkey and Pakistan are both allied with Azerbaijan—although allegations about the presence of Turkish and Pakistani troops on the ground have been rejected by both countries—and India is supplying military equipment to Armenia.

But the internet activity around this conflict also echoes earlier online skirmishes, in particular Turkey’s Operation Peace Spring offensive against the Kurds in northern Syria in 2019 and the long-running dispute between India and Pakistan over Kashmir which flared up again in 2019. During those outbreaks of real-world conflict, Pakistani and Turkish accounts supported one another with hashtags, including #Pakistanisnotalone and #Turkeyisnotalone.

During the current Azerbaijan–Armenia clash, a new hashtag has emerged linked primarily to Turkish and Pakistani accounts: #Azerbaijanisnotalone. Moving quickly, we collected and analysed over 200,000 tweets by at least 70,000 accounts using this new hashtag, along with 32 other hashtags that were being used by both combatants and their allies online.

We focused mainly on tweeting activity between 27 September and 1 October. However, new hashtags have been created since then, and the Twitter contest continues through the hashtags #Armenia and #Azerbaijan.

We also found significant spikes in account creation in the first hours following the outbreak of hostilities on 27 September, and for some days afterwards.

Many of these accounts began immediately tweeting the same hashtags, retweeting or boosting the same content, and exhibited other features that suggest potential inauthentic behaviour.

While we found suspicious behaviour on both sides, from our preliminary analysis it appears that most of the recently created accounts are on the Armenian side. This imbalance may be due in part to the fact that Azerbaijan has been restricting access to social media since the fighting began.

A notable feature of both Armenian and Azerbaijani activity has been the targeting of high-profile US celebrities. In the early hours of the conflict, the Twitter accounts of celebrities Kim Kardashian and her husband Kanye West were bombarded with mentions and replies calling on them to support Armenia, where Kardashian has family ties.

When rapper Cardi B expressed support for Armenia, she came under attack from large numbers of pro-Azerbaijan accounts using hashtags like #DontbelieveArmenia and #cardibterrorist. Based on analysis by other researchers, this activity also appears to be suspicious.

This fight is being waged across multiple platforms and languages, using a diverse range of tactics, from disinformation to enlisting celebrity starpower. Our snapshot reveals just one small sliver of the efforts on both sides to control the international narrative of the conflict.