In an Arms Race Between India and China, Aircraft Carriers will be the Deciding Factor 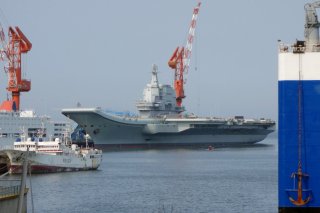 Key Point: Overall, the Asian-Pacific navies are acquiring greater range, speed, operational maneuver, firepower, versatility, and flexibility, as well as improved battlefield knowledge and command and control. Consequently, conflict in the region, should it occur, would certainly be faster, more long-distance and yet more precise and more lethal, and perhaps more devastating in its effect.

Aircraft carriers, it seems, are all the rage nowadays in Asia. Long written off by some as bulky, oversized “cruise missile magnets,” the flattop appears to be enjoying a new lease-of-life as of late.

Until quite recently, only two nations in the Asia-Pacific operated fixed-wing carriers: India with a 50-year-old-plus ex-British carrier; and Thailand with its “pocket carrier,” the Chakri Nareubet. Both vessels could only operate aging Harrier jump jets, and most of these aircraft were in fact long inoperable.

Today, China operates one aircraft carrier, the ex-Soviet Varyag, refurbished and rechristened the Liaoning. In addition, India is in the process of accepting two new carriers, one based on the 45,000-tonne Admiral Gorshkov (sold to India in 2004 and heavily refitted as the INS Vikramaditya), and an indigenously built INS Vikrant, which is currently undergoing sea trials.

More on the Way?:

More carriers are on the way. At least two Chinese indigenous carriers are believed to be under construction. It has been speculated that the Chinese navy (PLAN) could eventually operate up to six aircraft carriers, equipped with the indigenously designed J-15 fighter. India plans to possess at least three carriers, one for each naval command.

In addition, at least three other Asian-Pacific nations – Japan, South Korea, and Australia – are all acquiring large open-deck helicopter assault ships. While none of these ships is intended as a fixed-wing aircraft carrier, they could serve as the basis for future vessels. Indeed, the Australians are buying two ships from Spain that were originally intended for fixed-wing aircraft, and they still include the ski-lift design.

Even if just a few of these countries acquired fixed-wing carriers, it would have enormous implications for how regional navies might operate in the future. In the case of China, it would likely mean the fundamental reorganization of the PLAN around Carrier Strike Groups (CSGs), with the carrier at the heart of a constellation of supporting submarines, destroyers and frigates – an amalgamation of power projection at its foremost. Such CSGs are among the most impressive instruments of military power, in terms of sustained, far-reaching, and expeditionary offensive force.

The Challenge of Carrier-Based Operations:

Possessing an aircraft carrier, however, does not automatically translate into being a carrier-based navy. In the case of China, for example, it could be 20 years or more before it could operate a full fleet of four to six CSGs.

Moreover, few things are more challenging than carrier operations. Landing an aircraft on a carrier deck, moving in all three axes, is one of the most stressful aspects of flight operations. At the same time, the carrier deck is a highly dangerous work area, given its relatively small size and the number of activities all taking place at the same time. Consequently, the potential for mishap resulting in the death of the pilot or those supporting him is very high.

Carrier operations carry additional burdens. More than any other surface combatant, a carrier is a “system-of-systems” in and of itself. Carriers typically have several different aircraft types aboard in a “carrier air wing”. A US carrier air wing has four separate fighter squadrons, an electronic warfare squadron, a squadron of anti- submarine and search-and-rescue helicopters, an early warning squadron, and a cargo aircraft detachment.

Moreover, so-called “cyclic operations” – the continuous launch and recovery of air missions over the space of a day – requires the careful orchestration of men and machines, all of which requires continuous practice to even begin to approach any degree of proficiency. Not only does this require a large shore-based training institution, but also a commitment to regular sea-based exercising.

Consequently, it is doubtful that the PLAN or the Indian Navy will anytime soon attempt to duplicate the complexity of a US aircraft carrier. For one thing, both the current generation of Chinese and Indian carries use a “ski-jump” design, which obviates the need for complicated catapults. On the other hand, a ski-jump carrier means that the number of fixed-wing aircraft it can carry are greatly reduced – to perhaps no more than a couple dozen (in comparison, a US Nimitz-class supercarrier carries around three times as many fighters) – and it limits how many aircraft can be operated at any one time.

Additionally, a ski-jump design means that these fighter aircraft have to sacrifice weapons loads in order to take off. They are, essentially, flying gas cans, greatly limiting their firepower and range of operations.

All of these challenges have been starkly evident in Russia’s recent efforts to use its sole aircraft carrier, the smoke-belching Kuznetsov, in Mediterranean operations over Syria. It quickly lost two aircraft (one taking off, the other landing), out of a complement of just 15 fighters.

Moreover, most of its combat aircraft were equipped with only short-range air-to-air missiles, making them useless for bombing sorties. In general, the Kuznetsov has not made much of a difference to Russian operations in Syria.

The Shape of Things to Come:

Nevertheless, based on current trajectories, the overall expansion of sea-based aerial operations on the part of Asian-Pacific nations is significant enough to warrant attention. The proliferation of aircraft carriers is a foregone conclusion, and next-generation carriers in Asia are likely to be equipped with catapults and even nuclear propulsion, meaning more operational aircraft and longer ranges.

Even a handful of carrier-based fixed-wing aircraft – especially highly capable systems such as the US F-35 or Russian Su-33 – could play a decisive role in battle and would also likely shift regional balances of power, particularly in such places as the Taiwan Strait and the South China Sea.

Overall, the Asian-Pacific navies are acquiring greater range, speed, operational maneuver, firepower, versatility, and flexibility, as well as improved battlefield knowledge and command and control. Consequently, conflict in the region, should it occur, would certainly be faster, more long-distance and yet more precise and more lethal, and perhaps more devastating in its effect.

This first appeared in AsiaTimes here. This piece was originally featured in January 2017 and is being republished due to reader's interest.