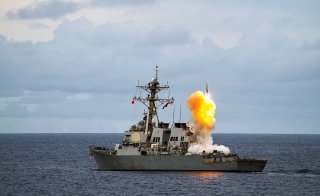 Here's What You Need to Remember: There is no reason why this kind of SM-6 application would not bring great tactical utility to ground-war commanders. They could be used, in tandem with aerial sensors such as drones, surveillance planes or Air Force fighter jets, to go after approaching targets from beyond the horizon, both offensively and defensively.

The Army will soon fire the Navy’s ship-launched Standard Missile 6 from the ground as part of a new Mid-Range Capability weapons program designed to bring new dimensions to land attack.

In a manner aligned with the Pentagon’s Cross-Domain warfare strategy, the Army will not only draw upon Navy software, hardware and weapons technology but also leverage Navy contract vehicles to bring the new land-fired prototype to life by 2023.

“Adapting existing systems as much as possible will allow us to move faster than traditional acquisition methods to get the capability into the hands of soldiers,” Lt. Gen. Neil Thurgood, Director of Hypersonics, Directed Energy, Space and Rapid Acquisition, said in an Army statement.

The SM-6, a long-standing crucial element of the Navy’s surface ship layered defenses, brings a unique ability to pinpoint targets within a specific range envelope, complementing the Army’s high-priority Long-Range Precision Fires program. With ranges able to reach as far as 300 nautical miles, an SM-6 fills a key attack gap between the emerging Precision Strike Missile and longer-range weapons such as new, now-in-development hypersonic.

“The MRC will complement other critical systems in the Army’s long range fires portfolio, providing a combined operational and strategic capability that can attack specific threat vulnerabilities in order to penetrate, disintegrate and exploit targets in deep maneuver areas critical to the joint fight,” an Army statement from Redstone Arsenal said.

While Navy SM-3 already arms land-based Pentagon Aegis Ashore ballistic missile defense systems, SM-6 would bring yet another attack or even defensive option to land commanders. The weapon continues to be in high demand by the Navy, in part because software upgrades have given it a “dual-mode” seeker. This enables the weapon to change course in flight and adjust to the radar ping emerging from targets on the move. Instead of needing to rely upon a ship-based illuminator for targeting guidance, a dual-mode seeker-equipped SM-6 has its own built-in receiver, allowing it to both send forward signals and receive new target information while in flight.

This would be useful to ground commanders for a number of reasons. First, as a defensive “interceptor” weapon, the SM-6 could offer a larger, more lethal interceptor with which to track and destroy approaching ballistic missiles. It could potentially fill a needed gap between longer-range defenses such as an SM-3 or closer in defenses such as those used for Forward Operating Base protections. A medium-range interceptor therefore, akin to that now arming surface ships, might allow ground units to operate in higher risk areas otherwise more vulnerable to enemy fire.

Also, the SM-6 has offensive attack uses as well, a technical possibility more fully realized by its use in the Navy’s now-deployed Naval Integrated Fire Control-Counter Air system. The NIFC-CA, as it is called, uses an aerial node as a relay to find enemy attacks from beyond the horizon, network the threat information to surface ships which can then launch guided SM-6s to destroy approaching missiles from much greater distances. The earlier a commander can learn of an approaching anti-ship missile, the better the chances to defend. The successful linking or networking with a surface-ship-fired SM-6 and an aerial node such as a Hawkeye plane or even an F-35 stealth fighter jet, introduces the prospect of using the weapon to launch offensive attacks beyond the horizon as well.

Kris Osborn is Defense Editor for the National Interest. Osborn previously served at the Pentagon as a Highly Qualified Expert with the Office of the Assistant Secretary of the Army—Acquisition, Logistics & Technology. Osborn has also worked as an anchor and on-air military specialist at national TV networks. He has appeared as a guest military expert on Fox News, MSNBC, The Military Channel, and The History Channel. He also has a Masters Degree in Comparative Literature from Columbia University. This article first appeared two months ago and is being republished due to reader interest.