The Army Still Loves the M249 Squad Weapon: What Will Replace It? 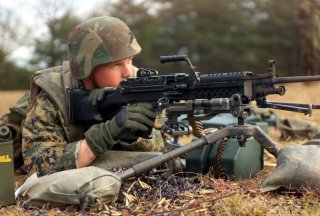 Here's What You Need to Remember: The M249 is not a particularly accurate weapon, accurate to only twelve minutes of angle (MOA). In other words, at 100 yards a burst from an M249 could be expected to place rounds with twelve inches of the designated aiming point. At 500 yards, that increases to 5 feet. Machine guns are meant to deliver suppressive fire and not point or destructive fire, so to some extent dispersion is a good thing.

In the early 1990s, the U.S. Army and Marine Corps introduced a new weapon designed to radically boost the firepower of infantry squads. The M249 squad automatic weapon, or SAW, fired the same ammunition as the M16A2 rifle at a rapid rate of fire and was more compact than the gun it replaced. Although controversial, the M249 still serves today in the U.S. Army and U.S special operations forces worldwide.

Since World War II, a fast-firing automatic weapon was the cornerstone of a U.S. infantry squad, be it U.S. Army or Marine Corps. Directed by the squad leader, the automatic weapon is critical in providing suppressive fire, either in the attack or defense. The first squad automatic gun was at first the M1918 Browning Automatic Rifle, replaced in the 1950s by the M60 general purpose machine gun.

By the 1980s, U.S. ground forces started shopping around for a new light machine gun (LMG) to replace the M60 at the lowest unit levels. This was not the first time the services had shopped around for a LMG. For instance, a previous effort in 1974 went nowhere, but one outcome was the development of the Minimi light machine gun for the requirement by Fabrique Nationale of Herstal, Belgium.

The Minimi was a 13-pound squad automatic weapon that fired the 5.56-millimeter round, the same as the M16 series of assault rifles. It used a gas operating system utilizing a rotating bolt head and was just over three feet long. The Minimi was fed from 100 or 200 round belts of ammunition and could, in a pinch, use NATO-standard M16 magazines.

The Minimi was lighter, shorter, and fired faster than the M60 machine gun, essential considerations for infantrymen riding in the cramped passenger compartment of an armored personnel carrier or amphibious assault vehicle. The M60 was typically served by a gunner and one or two assistant gunners or ammunition bearers, but the M249 and ammunition were light enough it required only one soldier to operate, and additional ammo could be distributed through the squad to ordinary riflemen.

One of the significant tradeoffs in replacing the M60 with the M249 was power and range. The M60, warts and all, fired the heavier 7.62-millimeter round. Each round had 2,593 square foot pounds of muzzle energy, and the maximum effective range was 1,200 yards. As a result, the more massive 7.62 round could penetrate cover in ways 5.56-based weapons could not. The smaller caliber M249 generated 1,093 square-foot pounds of muzzle energy and had a maximum effective range of 1,094 yards.

The M249 was type classified the M249 for U.S. Military service in 1982. The acquisition schedule called for the U.S. Army to purchase 49,979 M249s and the Marines 9,974. However, in 1985 the Pentagon halted deliveries to incorporate many modifications to make the weapon more ergonomic, including heat shields to protect the user from hot barrels and a reduction of sharp edges. After the improvements were implemented, resulting in modified guns known as M249 Product Improvement Program (PIP), deliveries resumed.

The M249’s first conflict was the 1991 Gulf War, followed by the 1992 U.S. intervention in Somalia. After 9/11, M249s went to war with the U.S. Army’s Green Berets, 10th Mountain Division, 101st Airborne Division, and U.S. Marines. The M249 fought throughout the Iraq War and today is in the fight against the Islamic State in Iraq and Syria.

The M249 has evolved over the years. To aid in target identification and acquisition, SAWs were fitted with Trijicon Advanced Combat Optical Gunsight (ACOG) and Elcan Spectre optics. A paratrooper version has a 13.7-inch barrel, as opposed to the standard 18-inch barrel, and a collapsible stock. The “Paratrooper” version has an overall length less than three feet and weighs just 16 pounds. A model for special operations forces is even lighter but with a longer barrel for greater range. However, that has been mostly replaced by the Mk.46 and Mk.48 lightweight machine guns, also based on the M249. The Mk.46 and Mk.48 both have an emphasis on light weight and flexibility, with the ability to mount pistol foregrips, laser aiming devices, and other accessories as needed.

The M249 has always had detractors, even after Fabrique Nationale made several modifications to the weapon. A 2006 report by the CNA Corporation, “Soldier Perspectives on Small Arms Combat,” polled combat veterans on their views of U.S. infantry weapons. Of the M9 pistol, M4 carbine, M16 assault rifle and M249 squad automatic weapon, the M249 came in third in soldier satisfaction. It also received low marks in weapon handling, maintainability, cleaning equipment, and corrosion resistance. For example, 30 percent of M249 handlers reported experiencing an ammunition stoppage in combat, and more than a third of M249 gunners stated they were not confident in their weapon.

Another issue with the M249 is accuracy. The M249 is not a particularly accurate weapon, accurate to only twelve minutes of angle (MOA). In other words, at 100 yards a burst from an M249 could be expected to place rounds with twelve inches of the designated aiming point. At 500 yards, that increases to 5 feet. Machine guns are meant to deliver suppressive fire and not point or destructive fire, so to some extent dispersion is a good thing. While the U.S. Army accepts this as part of its philosophy of firepower, the U.S. Marines have placed their M249s in storage and replaced them with the M27 Infantry Automatic Weapon (IAR). The Marines, with a history of marksmanship and well-placed fire, believe the lighter, more accurate M27 can perform the mission with fewer rounds expended.

The M249's time is coming to a close. Each Marine rifle company retains ten weapons in storage just in case the company commander needs them. The Army is researching its Next Generation Squad Automatic Rifle, which promises a lighter gun and ammunition while remaining highly lethal. Unless the Army fails to procure the NGSAR M249—which is a distinct possibility—the M249 will likely fade into history by the 2030s.

Kyle Mizokami is a writer based in San Francisco who has appeared in The Diplomat, Foreign Policy, War is Boring and The Daily Beast. In 2009 he co-founded the defense and security blog Japan Security Watch. This article first appeared two years ago.