The Army Won't Be Leaving Behind The M4 Rifle Anytime Soon 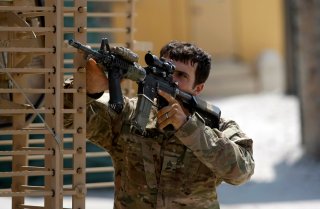 Here's What You Need To Remember: Today the U.S. Army continues to use the M4 series of carbines. Although the Army shows a great deal of institutional interest in adopting a new, more lethal caliber and assault rifle, small-arms development has largely plateaued and a new wonder weapon worth the cost of replacement seems unlikely.

The standard infantry weapon of the U.S. Army can trace its origins all the way back to the Vietnam War. The M4A1 carbine is a shorter, lighter, fully modernized version of the original M-16 rifle first issued in the 1960s. Although by no means perfect, the M4A1 is a compromise weapon meant for an Army that could—and often does—fight virtually anywhere on the globe, from cities to desert wastelands.

The story of the M4A1 begins in 1962, when the U.S. Air Force ordered 8,500 of a new breed of rifles. Designed by Eugene Stoner, the “ArmaLite Rifle-15”, or AR-15, was a lightweight rifle made of aluminum, steel and plastic.

Unlike the contemporary, heavier 7.62x51-millimeter battle rifles in use by the U.S. and NATO, the AR-15 was what became known as an “assault rifle”. The The AR-15 eschewed the older 7.62.51 millimeter NATO round in favor of the newer lighter 5.56-millimeter round. The new rifle weighed 6.35 pounds, as opposed to the 9.32 pounds of the then-current issue M14. The AR-15 and a battle load of 120 pounds of ammunition weighed just 11.04 pounds, while the M14 and battle load weighed 18.93 pounds. The new rifle was also allegedly more reliable, more accurate, and six inches shorter in overall length.

The U.S. Army jumped on the AR-15 bandwagon, looking for a lighter but still lethal rifle that would perform well in the jungles of Vietnam. The Army called the new rifle the M16 but fatefully changed the gunpowder used in bullets issued to soldiers. The M16’s “direct impingement” design channeled some of the gunpowder gasses into a metal tube that ran back into the weapon’s receiver, pushing a bolt carrier group, ejecting the spent brass cartridge, loading a fresh cartridge, and firing the weapon.

The gasses tended to channel gunpowder residue into the rifle, increasing the need for cleaning. At the same time, rumors circulated within the Army that the M16 did not need cleaning. Meanwhile, unbeknownst to the Army, the new substitute gunpowder produced large amounts of residue. The combination of all these factors led to repeated jamming on the battlefield, a problem that cost American lives and required considerable effort to overcome. The Army stuck with the M16, eventually fielding the M16A1, and in the 1980s fielded the M16A2.

During the Vietnam War a shortened version of the M16, the XM177 “Colt Commando” was procured in limited numbers for U.S. special forces and reconnaissance teams operating in Vietnam. The weapon was popular but was never issued to the wider U.S. Army. In the mid-1980s, the Army again became interested in a carbine version of the M16. The XM4 was designed to shoot the same ammunition as the M16A2 but had a shorter 14.5-inch barrel and collapsible stock. Like the M16A2, the XM4 fired semi-automatic and three round burst.

The advantages of a carbine weapon over a full-sized rifle were many. The XM4 carbine was six inches shorter than the M16A2, making it easier to carry in the back of a M2 Bradley infantry fighting vehicle, a UH-60 Blackhawk, or practically any other vehicle. The shorter barrel length made the weapon more maneuverable in confined spaces such as buildings or jungle. The two weapons disassembled virtually identically and had the same manual of arms. At the same time, the two weapons shared ammunition and magazines.

The U.S. Army began issuing the M4 carbine in 1999, while the U.S. Marines started testing the weapon in 2002 eventually adopting it for frontline riflemen. Unlike the M16A2, the M4 is issued in a “flat-top” configuration without a built-in carrying handle/rear sight. Instead, the M4 is fitted with a so-called Picatinny Rail, a system developed by Picatinny Arsenal for the mounting of optics and accessories. This allows the Army to issue a variety of gun sights for use with the M4. Some units are issued with the Trijicon M150 ACOG four-power day/night sight, while others are issued the M68 Close Combat Optic, also known as the Aimpoint M4. M4s are frequently issued with visible and infrared light and laser aiming devices such as the AN/PEQ-15.

In 2016, the Army began upgrading M4 carbines to the new M4A1 standard. The upgrade consists of a number of new features, including a heavier barrel, to address concerns that the older barrel heated up too quickly during extended combat, leading to a loss of accuracy and eventually breakdowns. The weapon is now more left-handed friendly, with fully ambidextrous controls. Finally, the -A1 variant includes a new fire control group with a better, more consistent trigger and the ability to fire fully automatic. (Unfortunately the Army has detected a dangerous safety defect with the new trigger group that allows a loaded rifle to be fired without pulling the trigger, a problem that so far affects ten percent of upgraded rifles.)

Today the U.S. Army continues to use the M4 series of carbines. Although the Army shows a great deal of institutional interest in adopting a new, more lethal caliber and assault rifle, small-arms development has largely plateaued and a new wonder weapon worth the cost of replacement seems unlikely. The U.S. Marine Corps, after adopting the Heckler and Koch 416 assault rifle to replace the M249 Squad Automatic Weapon, is now set the adopt the new rifle, now known as the M27, across frontline Marine infantry units. Marine combat support and support units will continue to use the M4. After more than fifty years, Eugene Stoner’s weapon is still on America’s front lines. It isn’t likely to go away any time soon.

Kyle Mizokami is a defense and national-security writer based in San Francisco who has appeared in the  Diplomat, Foreign Policy , War is Boring  and the  Daily Beast . In 2009, he cofounded the defense and security blog  Japan Security Watch . You can follow him on Twitter:  @KyleMizokami. This first appeared several years ago.