AUKUS Sunk the French: Is Europe’s Indo-Pacific Strategy Next? 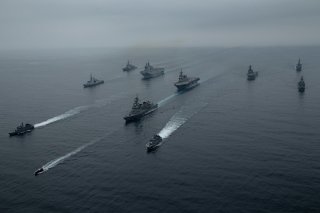 The AUKUS defence and security pact among Australia, the United Kingdom and United States has clearly sunk French, and associated European Union, sentiment towards Indo-Pacific integration. Resurfacing relations won’t be easy, but it should be prioritised to help deliver the optimal 21st-century strategic environment for all concerned.

The arrangement has already produced considerable symbolic fallout. Most notable was France’s decision to recall its Australian and US ambassadors in response to the AUKUS announcement of a nuclear-powered submarine program that spelled the end of French shipbuilder Naval Group’s multibillion-dollar contract with Australia. There are signs that this could lead to tangible setbacks for Europe’s cooperation in the Indo-Pacific. Paris has, for example, looked to frustrate progress on free-trade negotiations between the EU and Australia.

What’s most striking about these events is how they interrupted a years-long trend of intensifying engagement by Paris, Brussels and other continental capitals with the Indo-Pacific as both a region and a geopolitical construct. This interruption should be treated as a serious concern at both ends of the relationship, even if AUKUS might help alternatively bind a non-EU European country, the UK, and a global superpower, the US, to the very same region and construct.

The Indo-Pacific is an area of both vast and increasing opportunities and challenges, most of which are influenced by the continuing rise of China. Responding to regional dynamics is inevitably improved through burden-sharing, particularly when it engages largely like-minded partners and can leverage shared membership of institutional arrangements such as the US alliance system.

The release last week of a key document in this process of engagement, the EU strategy for cooperation in the Indo-Pacific, was largely lost in the wake of the AUKUS announcement. It establishes the bloc’s priorities and intended mechanisms for engaging on critical regional issues. Its priorities include promoting economic development and integration, maintaining regional security, protecting international supply chains, and mitigating and adapting to climate change—all of which have resonance with Indo-Pacific governments to varying degrees.

The EU and its member states are actively pursuing partnerships with Indo-Pacific countries to advance common commercial and strategic interests. Though incipient, their engagement is well founded. France has a direct national interest through several of its overseas territories; 1.5 million of its citizens and most of its large exclusive economic zone are found in the Indo-Pacific. Others, such as Germany, and the EU as a whole, are acting with more generalised but still genuine concern for the health of their deeply connected economies and the international rules-based order.

European–Indo-Pacific partnerships have already advanced past the rhetorical stage. The German frigate Bayern, for example, is currently participating in joint military exercises in the region 20 years after Berlin last had an Asian naval presence. Diplomatic partnerships such as the France–India–Australia trilateral have also been formed. EU–ASEAN ties have advanced through several channels, laying the groundwork for potential game-changers such as a region-to-region free trade agreement.

As a multi-author report from the Perth USAsia Centre and Konrad-Adenauer-Stiftung published this week notes, Indo-Pacific governments have broadly welcomed and sought to deepen these increasing European interests.

AUKUS will inevitably threaten these promising partnerships so long as the perception persists that the Anglosphere is set to dominate future Indo-Pacific relations. Such perceptions can, however, be managed through the same processes of adroit diplomacy that will be necessary to return Australian, UK and US relations with Europe to the status quo ante of a little over a week ago.

Despite the current contretemps, hopes for a relatively quick rebound are encouraged by two factors in particular. The first is that some key Indo-Pacific countries, including Japan and India, with which European countries have also formed important regional relationships, have already welcomed AUKUS to some degree. This is because the arrangement aligns with the very same goals of engaging more partners in responding to complex regional affairs that have driven continental European ties.

The second encouraging factor is that, as French officials and observers have been quick to note in the past week, motivations for European integration in the Indo-Pacific—and the source of Paris’s opprobrium at the AUKUS announcement—go far beyond the commercial imperative of protecting a single submarine deal, no matter how valuable. They constitute a much deeper and wholly genuine commitment by Europe to help shape the region’s future in ways that can benefit all.

These realities should quickly be recognised and acted on by policymakers in Canberra, London and Washington, as well as Paris, Brussels and other European capitals. If managed correctly, the new AUKUS arrangement could still provide an avenue for encouraging, rather than impeding, the impressive integration of Europe into the Indo-Pacific in the 21st century.

James Bowen is a policy fellow at the Perth USAsia Centre and the editor, most recently, of Europe’s Indo-Pacific embrace: global partnerships for regional resilience.