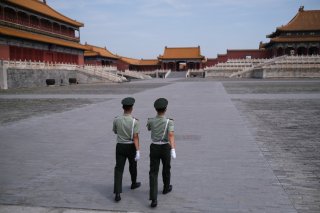 Beijing’s party-controlled legal system and two-million-person Ministry of Public Security are key tools for clamping down on internal dissent and ensuring that the information available to China’s citizens perpetuates the Chinese Communist Party’s rule. This system of information control and repression bears no resemblance to any system of law or free speech in a liberal democracy.

Yet Beijing’s narrative-spinning machine seeks to establish exactly this equivalence.

Equating the Australian Security Intelligence Organisation’s search of the homes and devices of Chinese state media employees in Australia with what the Chinese security apparatus does in the name of state security, including the threats it made against Australian journalists Bill Birtles and Mike Smith, is a new theme in this storytelling.

But the Beijing narrative should be seen for what it is: a deliberate and audacious attempt to establish false parallels to obscure the CCP’s own abuses and focus critics on their own internal dynamics and debates.

Taking it seriously doesn’t just demean Australia’s system of government and law. It gives the ‘out and proud’ authoritarian rulers in Beijing a disturbingly free pass right at a time when their intimidation and silencing of domestic and foreign critics is accelerating—and when reversing that should be the focus of increasing international attention and effort.

Unlike Birtles and Smith, the four Chinese individuals involved—the bureau chief of the China News Service, Tao Shelan; China Radio International’s Sydney bureau chief, Li Dayong; and two other Chinese journalists—faced no prospect of first being taken away to a black prison and interrogated by tens of people at a time every day for months without having been charged with a crime, and then being charged and inevitably found guilty in a CCP-run court for what in China is a uniquely opaque and flexible offence: endangering ‘state security’.

Birtles and Smith knew that the threat of detention and interrogation without charge was real because two Canadians and two Australians have already been living through this. They’ve joined thousands of Chinese, including domestic journalists and now citizens of Hong Kong, along with more than a million Chinese citizens in arbitrary mass detention in Xinjiang.

The 18-year jail sentence given to Chinese billionaire Ren Zhiqiang after he referred to Xi as ‘a clown stripped naked who insisted on continuing being emperor’ for his mishandling of the pandemic is just the latest example of the internal clampdown to protect Xi from dissent, newsworthy because of Ren’s wealth and party membership.

And if we didn’t understand the environment of fear and coercion that Beijing’s security apparatus works hard to create by now, this week gave us the account of another Australian, ABC chief correspondent Matthew Carney, telling us of the ugly and direct threats made back in 2018 towards him and his family, including to interrogate his 14-year-old daughter and imprison her in an adult Chinese jail.

All for him doing his job as a reporter. There was no insinuation of covert or espionage-like activity even in the strident lines from the angry security officials berating him and his family and eventually extorting ‘confessions’ about visa forms. His offence was apparently that he was an Australian, and the Australian parliament had just passed a law that would make it harder for Beijing to covertly interfere with the Australian political system.

Ironically, that law was the basis for ASIO’s searching the four Chinese state media employees’ homes and devices. Those searches, made under warrant, are part of a deep, careful investigation into Chinese state interference in the workings of the New South Wales parliament. It raises the prospect that the investigators may be able to convince routinely sceptical prosecutors that the evidence gathered meets the threshold of criminal liability and a case or cases should be taken to court.

If that happens, some or all of the four individuals may face charges under Australian law and need to defend themselves in court. No off-books black prisons, arbitrary detention, lengthy interrogations or certain guilt here. Plenty of competent legal representation and advice and protection of their liberties and rights throughout, though. And all with plenty of media reporting and public debate as part of civil society holding government to account.

But let’s step back and look at what these events are actually about. They’re not some ‘tit for tat’ exchange between countries with political differences, where each is scoring own-goals on freedom of expression and journalism and the only issue is tallying up how many each system scores.

What we’re witnessing is a fundamental clash between two very different ways of organising and operating a society. And one—democracy—is the form of organising and governing that I happen to like more than state autocracies controlled by singularly powerful and unaccountable rulers who abuse their power to enrich themselves and to control others.

So, the regime in Beijing is using all levers, including the CCP’s total ownership of the Chinese legal system, to silence domestic and foreign critics and to intimidate other governments over anxieties they hold for the personal safety of their citizens in China. It’s also using its unique government institution—its united front machine—this way and to interfere in the operation of other societies and governments.

Meanwhile, the Australian government is working within all the constraints on law enforcement that apply in a system governed by the rule of law, with independent judges and juries, to assemble a credible body of evidence to take cases to court.

The Australian agencies’ motivation isn’t to protect a single-party authoritarian regime’s hold on power, but to protect our democracy and our freedoms from corrosive, covert and corrupting interference by Chinese state actors. It will result in freer speech and less intimidation and coercion of voices in our public debate by making it harder for arms of the Chinese government to organise covert, corrupting and intimidating action within Australian society. It has no equivalence with the silencing of voices in mainland China. And we, like every other democracy, have no institution of government remotely similar to Beijing’s United Front Work Department.

Let’s not have our tails twisted by Beijing-created narratives characterising how we operate as in any way a mirror of, or an excuse for, the actions of the CCP’s own nasty security apparatus.

And, better yet, let’s avoid creating false parallels with Beijing ourselves, when we need to be spending more of our time reinforcing what we value in our system, and working with like-minded states and civil-society institutions to do what we can to prevent the brutal excesses of the Chinese regime.

Perhaps we could also take a moment to even be encouraged by the careful way our law enforcement and judicial arms go about their business and to look forward to well-grounded, professionally defended, prosecutions under the foreign interference laws. That way justice will be done and be seen to be done.

What a contrast to what many thousands of humans are experiencing right now within mainland China’s system.