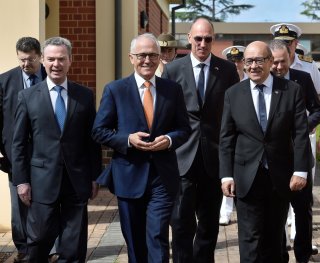 As Australia’s defence minister does her quarterly meetings with the French to push, pummel and pull at the future submarine project, Linda Reynolds is entitled to reflect, ‘How in heavens did we get here?’

Creating the 12 Attack-class submarines is a ‘wicked problem’.

The cost of the largest defence procurement in Australia’s history has blown out to $90 billion. The timelines stretch and the effort to get Australian industry to do the build is also a stretch.

Answering the ‘How’ question involves the strange sub saga of the last decade and the sliding-door moments: the opportunities that surfaced and became reality versus the possibilities that submerged and sank.

Before going through those doors to see what sank, consider what’s struggling to surface.

Surveying this megaproject, one of Canberra’s sharpest umpires, the Australian National Audit Office, didn’t offer any recommendations, only ‘key messages’, in its January performance audit.

When the ANAO can’t discern a better way—and goes gentle on whip, hammer or scalpel—it’s a mega toughie. The dollar meter tells the story, as the ANAO recounts:

‘Out-turned’ is Defence-speak for ‘accounting for inflation’. As it’s turning out, the dollars are blowing out. The $80 billion figure quickly turned upwards.

The July strategic update upped the acquisition cost of the Attack boats to $89.7 billion, in a forecast extending beyond 2040.

The precision of that last $700 million in the $89.7 billion forecast, 20 years from now, is a nice touch—nearly $90 billion, but not quite. ‘In the order of $80 billion’ in November; in the order of $90 billion by July. A billion here, a billion there, and that’s another 10 billion. Truly, this is a very hungry future submarine.

Defence deserves sympathy on timelines because of politics as well as complexity. In this telling, the figure of Tony Abbott, prime minister from 2013 to 2015, looms large.

After overthrowing Abbott as PM, one of Malcolm Turnbull’s first meetings was with Defence Secretary Dennis Richardson to discuss what became the 2016 defence white paper. Turnbull writes:

Dennis came straight to the point. ‘PM, you will by now have a copy of the draft Defence white paper. It’s a good piece of work. But part of it is complete and utter bullshit.’ Well, that got my attention. ‘It says,’ he continued, ‘that the future submarines can start to be delivered in the mid-2020s—so about ten years from now. That’s simply not possible. I told your predecessor this and he insisted that the 2020s date should go in and leave the problem for another government.’ I didn’t have to think too long about that—so I told Dennis we should include a completion date that matched reality, which was the early 2030s.

If Abbott had lasted as PM, he could have aimed for that mid-2020s target by torpedoing the bipartisan consensus on building Oz submarines in Oz.

Abbott wanted submarines based on the Japanese Soryu class, designed and built in Japan. He embraced Japan’s Shinzo Abe as a kindred conservative spirit. Getting a Japanese-made sub would cement a quasi-alliance with Japan within the trilateral relationship with the US.

Powerful arguments could be mounted: defence policy is too important to masquerade as industry policy. Every defence dollar must get the maximum bang for the buck. The Japanese sub would cost less and enter service quicker than an Oz build. Australia must move swiftly to deal with a darkening strategic outlook. It’d be a fiendishly difficult debate—even within the Liberal Party—but this big policy argument sank before being launched.

After presiding over the final death of the Australian car industry, Abbott quietly inched towards sinking the Oz submarine industry, running an ‘internal process’ to choose the builder of the new submarine.

Japan was entitled to think the deal was done. That changed when Abbott suffered an extraordinary caucus revolt in February 2015. A motion to ‘spill’ the leader got 39 ‘yes’ votes versus 61 to keep Abbott: about 40% of the caucus voted for an empty chair rather than the prime minister.

Scrambling for votes to avert the spill, Abbott agreed to South Australian Liberals’ demands for an open tender for the submarine contract. The concession fed into the fundamental fight to have future subs built at Adelaide’s Osborne shipyard, birthplace of the six Collins-class subs.

The open tender became a contest between Japan, France and Germany.

By September 2015, the caucus completed the job of beheading Abbott. Building subs in Japan went with him. Tokyo, though, believed it was still in the game.

In the cabinet reshuffle after Abbott’s fall, Adelaide MP Christopher Pyne became minister for industry, innovation and science. He writes of a Canberra meeting with Mitsubishi executives and the Japanese ambassador:

We had a wide-ranging and candid discussion about the submarine project, defence and the historical relationship between Australia and the three nations who were bidding—France, Germany and Japan. My suspicion that the Japanese believed they were likely to win was confirmed when I was told informally that only after this meeting did the Japanese bidders believe they might not win.

As the tender process concluded, Turnbull worried that Abbott had encouraged Abe to believe the decision would be ‘political’ and Japan would get the nod. Adelaide politics trumped Tokyo.

Calling Abe in April 2016 to tell him that France had won, Turnbull said the Japanese leader ‘felt, with some justification, that they’d been let down … The political way in which the tender arose always had the potential to create awkward misunderstandings in Japan.’

Politics is like that. And aligning Oz defence needs with industry policy makes for difficult politics with a mega price tag.

This artlce first appeared in the Australian Strategic Policy Institute's The Strategist.