Austria-Hungary: The Empire of the Living Dead 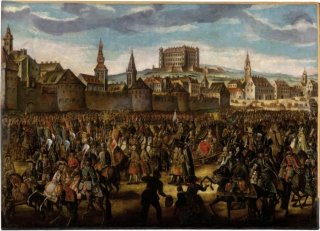 Here's What You Need to Remember: The Radetzky March is an important novel, since it singularly conveys the constrained spirit that some leaders of the Great Powers in Europe must have experienced prior to the First World War—the feeling that the conflict was preordained and that diplomacy merely provided respite from the inevitable clash that would bring down the old world, despite their best efforts.

Legend has it that in 1928, while living in Berlin, a dispirited Roth asked the band at the Hotel Adlon to play the Radetzky March—a march composed by Johann Strauss Senior in 1848 and dedicated to Field Marshal Radetzky in honor of the old soldier’s victory at Custozza—while the Austro-Jewish author was reminiscing about the past. Radetzky was the epitome of Austria’s imperial Heldenzeitalter (heroic age). The poet Franz Grillparzer waxes eloquently about this longest-serving, imperial Austrian officer (who served more than seventy years in total) in his poem, In deinem Lager ist Oesterreich (“In your camp is Austria”). More important to Roth, the old general singularly rekindled and solidified Austria’s neo-absolutist identity around the Habsburg dynasty after the revolutionary years of the Napoleonic Wars. In 1930, Roth, inspired by Austria’s past and no small amount of alcohol, finally got to work on the novel, which he finished in September 1932. However, it was his editor, Gustav Kiepenheuer, who chose the ironic title The Radetzky March—ostensibly compressing the novel’s content in one short phrase, but in reality, turning the meaning of the old march upside down; Roth’s novel was about death and demise, rather than victory and rebirth.