B-52 Bombers Will Be Useful in Defending Taiwan 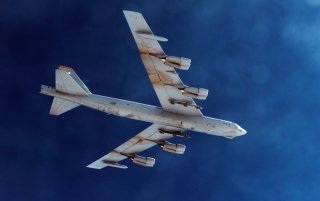 Here's What You Need To Remember: The Air Force operates more than 70 B-52s and, in the event of war, could deploy dozens of the huge planes to the Asia-Pacific region or fly them from the United States for missions over the Pacific war zone.

“America’s defense strategy in the Indo-Pacific is in the throes of an unprecedented crisis,” the study’s authors Ashley Townshend, Brendan Thomas-Noone and Matilda Steward warned. “America no longer enjoys military primacy in the Indo-Pacific and its capacity to uphold a favorable balance of power is increasingly uncertain.”

David Axe is a former Defense Editor of the National Interest. He is the author of the graphic novels War Fix, War Is Boring and Machete Squad.