The B-52 Is Old, But It Can Still Kill Enemy Warships 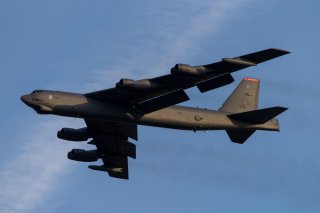 Here's What You Need to Remember: It isn't entirely clear how the warship was targeted or how and even if it fought back, but according to reports it was score one for the B-52s. That mock sinking of a destroyer highlighted the B-52's capabilities in ASuW today.

The capabilities of the United States Air Force's B-52 Stratofortress have expanded greatly since the aircraft first took flight in the 1950s. The Cold War-era heavy bombers have received regular updates, which could keep the venerable B-52 flying high for decades to come.

In recent months, the B-52s have been deployed around the world from Guam to Europe, and earlier this week two subsonic B-52s – call-signs "Bush 11" and "Bush 12" – flew from the Royal Air Force (RAF) base at Fairford and conducted joint exercises with Moroccan Air Force F-16s in a drill to find and "sink" a U.S. Navy destroyer, Forbes.com reported on Tuesday.

The exercise was conducted to demonstrate the bomber's latent anti-ship capabilities. This isn't exactly a new role or function for the B-52 however. Since the 1970s, the Stratofortress has been utilized in ocean surveillance missions in the Atlantic and Pacific and its aircrews have routinely trained with the U.S. Navy in these missions.

Moreover, in the 1980s the B-52 bombers stationed in Maine and Guam were armed with AGM-84 Harpoon anti-ship missiles to counter Soviet naval forces. The bombers could descend to low altitude, approach from different directions and launch salvos of Harpoons to saturate defenses from upwards of 100 miles away, reported AirForceMag.com.

The use of the B-52 in such situations was notable in that the bombers could carry a large complement of missiles, but could also be replenished in a few hours versus the days or weeks that most warships required. Most importantly, the bomber had the range to strike at the enemy's warships well before those vessels came within range of targeting U.S. Navy ships.

Given that Russia and China are "upping" the game with more advanced anti-ship weapons it is easy to see why the U.S. military would want to utilize the B-52 in anti-service warfare (ASuW) capacity.

In Monday's exercise, two B-52s took off from Fairford and flew south to "hunt" the Arleigh Burke-class guided-missile destroyer USS Roosevelt (DDG-80), which was one of four of the class of warships that operate from Spain in missile-defense patrols.

It isn't entirely clear how the warship was targeted or how and even if it fought back, but according to reports it was score one for the B-52s. That mock sinking of a destroyer highlighted the B-52's capabilities in ASuW today.

"Conducting these missions alongside our African partners shows the strategic reach of our joint force and our collective commitment to preventing malign influence in Africa," said Maj. Gen. Joel Tyler, U.S. Africa Command director of operations, as reported by Forbes.com.

The U.S. Air Force and U.S. Navy further showed inter-service cooperation last month when Airmen and Sailors worked together during the Aug. 12 SURFREM 15 naval exercises at Andersen Air Force Base, Guam. The two services came together for a day-long test called "Clutch Shot," in which the objective was to shoot a missile from a Navy P-8 Poseidon and from the USS Fitzgerald at a free-floating target at the same time.

A B-52 aircrew helped with nontraditional intelligence surveillance and reconnaissance.

"The harpoon shot support by the B-52 in SURFREM 15 just shows how no matter the service we are all one team capable and aware of how other services can integrate in a joint environment to accomplish a mission," said Capt. Matt Spinelli, 20th Expeditionary Bomb Squadron team chief. "Building on the relationship between the services, educating the crew forces, and building better ways to effectively and efficiently work together is always a goal that we strive for."

Last month in a single-day mission dubbed Allied Sky, six B-52 bombers flew across 30 NATO countries to highlight solidarity with U.S. partners and allies. Four of the Cold War-era U.S. Air Force bombers were deployed from Royal Air Force (RAF) Fairford in the UK and flew over Europe, while two bombers from the 5th Bomb Wing at Minot Air Force Base, North Dakota flew over the U.S. and Canada.

Allied Sky was meant to be the latest iteration of Bomber Task Force (BTF) missions that have been conducted in the European theater of operations since 2018.