B61-12 Nuclear Bomb Not-So-News Flash: It Can Hit Underground Targets 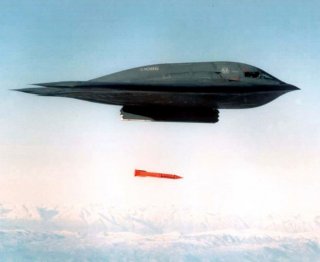 Here’s What You Need to Remember: The Pentagon and Department of Energy are working on the first production units of a new nuclear bomb variant that streamlines, improves and sustains a wide variety of options for nuclear strikes in a range of tactical scenarios.

The Department of Energy’s National Nuclear Security Administration The Fiscal Year 2021 Stockpile Stewardship and Management Plan—Biennial Plan Summary, states that, among other things, November 2021 will bring the “first production units of the B61-12 Life Extension Program.”

Experts with the Federation of American Scientists have told The National Interest that the B61 Mod 12 is engineered with a special “Tail Subassembly” to give the bomb increased accuracy, giving a new level of precision targeting using Inertial Navigation Systems.

By bringing an “earth-penetrating” component, the B61-12 vastly increases a commander’s options, by being able to hit narrowly targeted or pinpointed strikes at high-value targets underground. Importantly, this can be done without causing anywhere near the same level of devastation above ground or across a wider area. Of course, there is some debate about the possibility or advisability of considering any kind of limited, or tactical nuclear strike, yet the thinking is to offer commanders a wider range of options through which to deter potential aggressors.

The B61-12 has previously been integrated and test-dropped from an Air Force B-2 bomber as part of a fleet-wide stealth bomber upgrade which includes new enemy radar-evading onboard sensors, faster computer processing and new weapons adaptations.

Streamlining, upgrading different nuclear bomb variants into a single weapon brings a host of advantages, including the ability for a weapons-carrying aircraft such as a B-52 or B-2 to arm itself with a greater number of bombs. If each individual attack alternative with a single bomb then pilots could tailor or choose between a wide range of strike options with fewer on-board bombs, and therefore operate with an ability to carry more of them on one mission. This would prove useful in the event that some kind of multi-faceted or large-scale nuclear attack became necessary and the offensive force needed to drop multiple bombs of the same variety as well as some with different or alternative explosive configurations.