Bad Idea: America's B-1 Lancer Is No Gunship 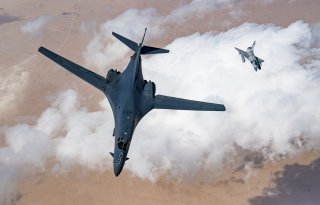 Here's What You Need To Remember: This recent push to have a B-1B gunship appears like a military industrial cash grab. The B-1B is too complex of an aircraft to take small arms fire that it would be exposed to in any combat air support situation in contested airspace, where it would fly low and slow to strike at enemy fighters, vehicles and outposts.

One day flying over Afghanistan, sometime in mid-2010, ground troops who were getting shot at requested ISR support (intelligence, surveillance, reconnaissance). Unfortunately when they requested this show of force, our small Air Force prop plane, the majestic and swan-like MC-12W, was insufficient to strike fear into the hearts of the Taliban through looks alone. Luckily, an Air Force B-1B bomber was flying in the stack with us. It was majestic watching it fly below us, and its silhouette evoked terrifying images in the ancient DNA in my brain. Perhaps having the B-1B bomber overhead helped end the incoming fire the troops were taking without firing a shot. Maybe not.

But the one thing I do know is that it cost an insane amount for every flight hour of this dragon-like aircraft to fly over the dusty, sparse terrain of afghanistan. The B-1B has the worst maintenance man hours to flight hour ratio of any aircraft in the U.S. arsenal, according to Air Force Magazine. Modifying the Bone to have kickass swivel guns and even more moving parts, such as in the patents The Drive recently unearthed, just seems like a way to make that ratio somehow worse.

The history of the B-1 Lancer is littered  with slip-ups and shifting priorities. Originally the B-1A (which was canceled) and B-1B bomber were designed only as supersonic nuclear bombers. Then they were converted in the mid-90s to a conventional-only role to fulfill nuclear weapons treaty obligations. Eventually the B-1B was modified to utilize a sniper pod, making it an effective ISR platform that could perform close air support.

But the B-1B bomber is on its way out. The retirement is scheduled for around 2035, which gives it a long, 45-year lifespan in spite of the constant changes in purpose and utilization.

This recent push to have a B-1B gunship appears like a military industrial cash grab. The B-1B is too complex of an aircraft to take small arms fire that it would be exposed to in any combat air support situation in contested airspace, where it would fly low and slow to strike at enemy fighters, vehicles and outposts.

The only reason the B-1 could do a show of force in Afghanistan, is that the main threat was 12.7mm DsHk, and not much else. Imagining a B-1B orbiting as a gun truck in Syria sounds simply terrifying. Much less in Ukraine.  If the Syrians have one thing, be it ISIS or the Syrian Arab Army, it’s heavy caliber guns. And the low observable elements built into the B-1B design can’t protect against the mark 1 eyeball. Several on camera shoot downs of Syrian aircraft are floating around the internet to back up this claim.

A B-1B gunship is a solution to a problem that doesn’t exist. Much like the MC-27J Gunship, this is hopefully a paper tiger that will never see a operational squadron.