Bad News: How China's Army Is Improving By Getting Smaller 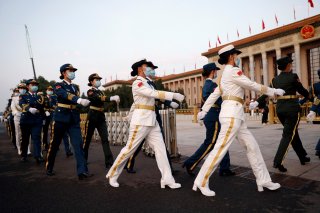 Here's What You Need to Remember: In some ways, China’s new military approach resembles that of another state that was once Communist. The Soviet Union ended World War II with a huge army of tanks, artillery and infantry. But in the early 1960s, Soviet leader Nikita Khrushchev slashed the size of Soviet conventional forces, which he believed had become increasingly obsolete with the advent of nuclear weapons and guided missiles.

Mao Zedong must be turning in his grave.

In his day, the name “People’s Liberation Army” conjured images of hordes of soldiers overwhelming their enemies with sheer numbers and Communist fervor.

Not anymore. China’s military is trading quantity for quality, foot soldiers for cyberwarriors.

“This is new data that has never appeared in the history of the People’s Liberation Army,” said a self-congratulatory article by Chinese news agency Xinhua (Google English translation here), which lauded military reforms by President Xi Jinping. “The Army’s share of the total number of troops in the military has fallen below 50 percent; the number of active duty members in non-combat units has been reduced by nearly half, and the number of officers has decreased by 30 percent.”

With 2 million members, the PLA (which includes the Army, Navy, Air Force, Strategic Rocket Forces, and the cyberwarriors of the Strategic Support Force) is still the largest armed force. But numerically at least, it is a shadow of the PLA of the 1950s, which had 6.3 million members, mainly infantry.

In 2015, Xi promised to shrink the PLA by 300,000 personnel, as the Chinese military continues to evolve from a Cold War infantry-dominated force to a high-tech organization that increasingly resembles the U.S. military.

The Xinhua article glowingly described a military as far removed from the rifle-armed peasants of the Korean War as armored knights differ from an Abrams tank. It spoke of H-6K bombers flying deep into the Pacific, new electronic jamming systems and long-range artillery.

“These are new terms that has never appeared in the history of the People's Army: synthetic [training] brigade, air assault brigade, aircraft carrier formation, airborne army, joint service support force,” Xinhua said. The article also emphasized the reorganization of the PLA from independent fiefdoms into joint commands in which the various services fully cooperate.

China has consolidated the seven former military regions into five theater commands, and split four PLA headquarters into 15 units. “After the adjustment, our army was more capable, the structure was more optimized, and it was more scientific,” Xinhua said. “It fundamentally changed the long-term land-based power structure, changed the national defense type of force...strategic early warning, far-sea defense, long-range strike, strategic delivery, information support and other new combat forces have been enriched and strengthened, and a joint operational force system with elite combat forces as the main body is taking shape.”

In some ways, China’s new military approach resembles that of another state that was once Communist. The Soviet Union ended World War II with a huge army of tanks, artillery and infantry. But in the early 1960s, Soviet leader Nikita Khrushchev slashed the size of Soviet conventional forces, which he believed had become increasingly obsolete with the advent of nuclear weapons and guided missiles.

China’s leaders have not declared conventional forces to be obsolete. But they have taken to heart the lessons of conflicts such as the First Iraq War, where smarts bombs and other high-tech weapons proved devastating against forces using Cold War technology and tactics. Like Russia, China’s military is becoming a more professional organization relying less on ideology and numbers, and more on high-tech weapons and joint air-land-sea-space operations. The result is a military that appears to mirror its Western counterparts in many ways.

But the Xinhua article also struck a nationalist tone that said China will take its own path. “The new, new structure, new pattern, and new look have taken firm steps on the road of strong military characteristics with Chinese characteristics.”

Michael Peck is a contributing writer for the National Interest. He can be found on Twitter and Facebook. This article was first published in February 2019.