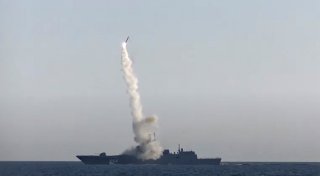 Here's What You Need to Remember: The missile boasts an operational range in excess of one thousand kilometers and up to two thousand kilometers depending on the launch platform and operating circumstances, enough to put the U.S. Navy’s carrier strike groups at risk and to impede the ability of carrier wings to operate effectively.

A Russian defense industry insider source told TASS news that Admiral Golovko, the third frigate of the Project 22350 Admiral Gorshkov class, “will become the first standard carrier of Tsirkons.” This report has not been officially confirmed or corroborated as of the time of writing, but TASS is a major state news outlet with a long track record for reliable defense industry information. It was known for months that the Project 22350 line was one of the lead contenders for an early Tsirkon fitting; over the course of 2020, the upcoming missile was test-launched at least four times from the lead Project 22350 ship Admiral Flota Sovetskogo Soyuza Gorshkov. The TASS report contradicts prior speculation that the Kirov-class battlecruisers Petr Velikiy and Admiral Nakhimov were first in line to receive the Tsirkon upgrade as part of a larger weapons modernization program. The Admiral Gorshkov class is a line of fifteen modernized guided-missile frigates, displacing over five thousand tons and reaching top speeds of around twenty-nine knots. The frigates boast Russia’s latest Paket-E/NK anti-submarine/anti-torpedo system, along with a vertical launching system (VLS) for P-800 Oniks, 3M-54 Kalibr, and Tsirkon missiles. Of the fifteen planned Project 22350 frigates, two are active and the third—Admiral Golovko—has been laid down and is scheduled to enter service within the next several years.

The 3M22 Tsirkon (also known as “Zircon”) is a winged, anti-ship hypersonic cruise missile with a reported speed of up to Mach 9 or roughly eleven thousand kilometers per hour. The missile was one of six new weapons unveiled by Russian president Vladimir Putin during his 2018 state-of-the-nation address. In addition to a wide range of surface ships, Tsirkon will be compatible with the new nuclear-powered Yasen-M cruise missile submarines.

The missile boasts an operational range in excess of one thousand kilometers and up to two thousand kilometers depending on the launch platform and operating circumstances, enough to put the U.S. Navy’s carrier strike groups at risk and to impede the ability of carrier wings to operate effectively. Citing the missile’s sheer speed and ability to maneuver mid-flight, Russian military observers have argued that Tsirkon cannot be reliably intercepted by any tools currently available to NATO forces. Retired Russian Col. Mikhail Khodaernok posited in an op-ed published by RT that the Arleigh Burke-class missile destroyers’ current surface-to-air systems were designed to neutralize supersonic cruise missiles like those carried by older Russian warships, but cannot effectively counter hypersonic threats. “Given the very high cruise speed of this state-of-the-art Russian anti-ship missile (Mach 8 and over), a potential enemy’s surface-to-air or anti-missile systems will be rendered ineffective due to zero reaction time (the gap between the moment of threat detection and the launch of an intercepting missile),” he wrote. “In other words, you don’t have any time to react, because your ship gets hit right after the missile is detected.”

Russian officials have not publicly revealed a firm production timeline, but the Tsirkon hypersonic missile is widely expected to enter service in coming years.