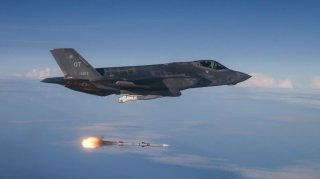 In a recent press release, the Norwegian defense and technology group Kongsberg announced they secured a contract with the government of Japan for delivery of additional Joint Strike Missiles. The deal, valued at 820 Norwegian Krone, or about $93 million, would be the second batch of Joint Strike Missiles received by Japan.

The original Kongsberg-Japan JSM deal was valued at a bit more than half of the current deal, and this recent contract reflects the reality of Japan’s F-35 fleet, which is growing fast. In a major arms deal announced earlier this summer, the Defense Security Cooperation Agency announced that the U.S. Department of State had cleared the way for Japan to buy more F-35s. Once realized, the Japan Self-Defense Forces will likely become the second largest F-35 operator in the world behind the United States.

One of the Japanese F-35’s most important weapons? The Joint Strike Missile.

The JSM is an advanced precision missile in service with the Royal Norwegian Navy and the Polish Navy, as well as the U.S. Navy and Marine Corps that can be used against moving targets on land and at sea. Thanks to two integrated winglets, the NSM is highly maneuverable.

Thanks to both the JSM’s stealthy, low radar cross section and respectable range, it can be launched from far, stand-off distances, allowing the F-35 launch platforms to stay farther away from harm.

Kongberg also manufactures the Naval Strike Missile, an anti-ship missile that originally began life as a ship-launched platform, but has recently been adopted by the United States Marine Corps.

In USMC hands, the NSM would be ground launched from Joint Light Tactical Vehicles. These modified JLTVs—without a cab area and unmanned, but with a pair of NSMs mated to the truck’s beds—would essentially operate on remote specks of land in the Pacific, keeping an eye out for Chinese PLA Navy ships, and in theory pushing enemy surface ships father out to sea.

With eyes on China, the United States and Japan are preparing to push PLA Navy ships farther and farther away, a strategy that will see the Kongsberg JSM and NSM missiles play an outsize role.

Caleb Larson is a Defense Writer with The National Interest. He holds a Master of Public Policy and covers U.S. and Russian security, European defense issues, and German politics and culture. This article first appeared in December 2020.