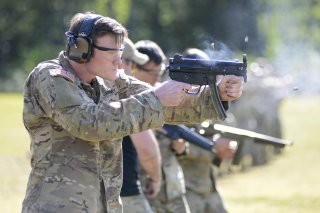 Key Point: Some of the best submachine guns are scaled-down assault rifles.

Image: A student assigned to the U. S. Army John F. Kennedy Special Warfare Center and School who is in the Special Forces Weapons Sergeant Course fires an MP5K submachine gun during weapons training at Fort Bragg, North Carolina May 12, 2020. The Soldiers were trainined to employ, maintain and engage targets with select U.S. and foreign pistols, rifles, shotguns, submachine and machine guns, grenade launchers and mortars and in the utilization of observed fire procedures. (U.S. Army photo by K. Kassens)