"Like a Baseball Bat To My Ribcage": I Survived a Sniper's Bullet 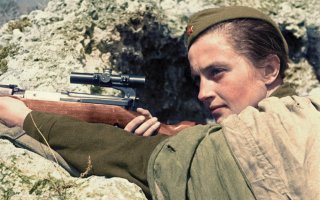 Here's What You Need to Know: “It was like a baseball bat to my ribcage,” Sheffloe recalled.

The German sniper scanned the battlefield outside his bunker on the outskirts of the port city of Brest, on France’s Brittany peninsula. He had already shot an American lieutenant; now he was looking for a new target. In front of him, American soldiers occupied numerous craters, the result of Allied bombings. He spied a sergeant running from one crater to the next, talking to the men, then running back to the wounded lieutenant.

Soon the sergeant returned, again rushing to each crater. As the sergeant made yet another climb, the sniper took aim and pulled the trigger. The bullet tore into the sergeant’s lower chest, puncturing his lung and lacerating his liver. Nineteen-year-old Sergeant Mortimer Sheffloe, serial number 37567919, of Company E, 2nd Battalion, 121st Infantry Regiment, 8th Infantry Division fell back into the crater. Blood drained from his body as his life passed before his eyes. The date was September 10, 1944.

Drafted by the U.S. Army

More than a year earlier Mort Sheffloe had been a high school senior in Crookston, Minnesota, when the U.S. Army drafted him. He reported to Fort Snelling, near St. Paul, for induction with 35 other classmates in May 1943 and traveled by private rail car to Camp Fannin, in Tyler, Texas, for training. The camp had opened only two weeks before Sheffloe arrived. “It was pretty primitive,” he recalled. It had basic facilities, including a theater and a post exchange.

Sheffloe received some good news at the camp. During his induction, he had scored high enough on the Army OCT-X3 exam to qualify for the Army Specialized Training Program (ASTP), which prepared qualified candidates for engineering degrees. “I was hoping for [the University of] Southern California or the University of Texas but got Texas A&M,” said Sheffloe. So in October he started school again. Eventually, he grew weary of the academic schedule and stopped studying. He was summarily kicked out of school.

“They took me out of the dormitory and put me in the horse stables, now a barracks,” he explained.

He shipped out to Camp Polk, Louisiana, and was assigned to the 97th Infantry Division, which was completing maneuvers. A truck took Sheffloe and several other soldiers out to the field, where they gathered around a bonfire on a cold night in January 1944 as they awaited assignment to their units. Soon, the division was transferred to Fort Leonard Wood, Missouri, for additional training, where Sheffloe qualified as an expert on the Browning Automatic Rifle (BAR).

Shipped Off to England

In early 1944, while the 97th trained to fight in the Pacific, other overseas divisions were taking heavy casualties. Instead of raising new troops for these losses, the Army stripped trained soldiers from stateside divisions to build a pool of replacements. The Army pilfered 6,000 soldiers from the 97th, including Private Sheffloe. He was made part of a “packet” consisting of five platoons commanded by five officers. They shipped out to Fort Meade, Maryland, then to Camp Shanks in New York, where Sheffloe made friends with Private Hamp L. Witt.

“He was a nice fellow,” Sheffloe recalled, “very quiet.”

Then it was a cruise across the Atlantic, ending at a replacement depot in Bristol, England. The depot occupied an old stone orphanage that dated back to the 1880s. One morning while exercising, the packet’s corporal asked the men “Did you hear? D-Day started.”

It was June 6, and the invasion of France was on. No one reacted openly to the news. “Mentally,” said Sheffloe, “we were thinking of days to come.”

Some of the men reported hearing planes flying over during the night. These could have been bombers heading to attack the German coastal defenses or Douglas C-47 Skytrain transports carrying paratroopers to drop inland, but Sheffloe heard nothing. He had slept deeply that night.

The men transferred to Yeovil in southwestern England. While Sheffloe and his packet trained, a British barrage balloon and antiaircraft unit arrived to defend the country from Hitler’s latest weapon, the V-1 buzz bomb. V-1s were winged missiles with pulse-jet engines that roared loudly until they ran out of fuel, then the engine would cut off and the rocket would impact randomly, setting off a significant charge of high explosives.

This important defense unit meant something else to Sheffloe. “We found they were all female,” he said. They were members of Britain’s Women’s Auxiliary Air Force (WAAF).

Taking advantage of a hole in the camp’s barbed wire fence one night, Sheffloe and another soldier snuck out to meet the WAAFs. With double daylight keeping the sky lit until 11:30 pm, the GIs chatted with the girls past midnight and then tried to sneak back into camp. They were caught, however, and confined to a Quonset hut brig for the night. Soon, an air raid siren roared and everyone in their tents took cover while Sheffloe and his comrade were left in the hut. Fortunately, no bombs landed nearby.

At the camp, enlisted men had to be in before dark but officers could stay out later. One night, Sheffloe stayed out too late. To prevent getting in trouble, he fashioned a lieutenant’s silver bar from chewing gum foil and placed it on his helmet liner.

“The guards saluted as I walked into camp well after dark,” he recalled.

On July 10, Sheffloe and the rest of his packet boarded a British troop carrier bound for Normandy, France. In over a month of fighting, the Americans, British, and Canadians had pushed the Germans away from the beaches and, although the British were having trouble capturing the city of Caen, the Americans had cut off the Cotentin Peninsula and captured the city of Cherbourg only days before Sheffloe’s arrival. The American First Army commander, Lt. Gen. Omar Bradley, was planning Operation Cobra, the breakout from Normandy, with the additional forces arriving from England and with a lot help from the Army Air Forces.

Sheffloe’s ship arrived at Utah Beach around 9 am on July 11. The English Channel was packed with ships. The men went over the side into landing craft, which carried them ashore. Once ashore, Sheffloe loaded duffel bags onto a 21/2-ton truck, which he then rode off the beach. To his left stood a German bunker (today’s Utah Beach Museum). Once the truck drove through a breach in the seawall, he saw another bunker to his right (today’s Roosevelt Café). The truck drove over a causeway and through the flooded lowlands before ascending a hill to the high ground.

After a four-mile journey, the truck arrived in Ste.-Mere-Eglise, where Sheffloe and the truck’s crew awaited the rest of the packet coming on foot. Once everyone was assembled, they dug foxholes and bedded down in a hedgerow field east of the town. A few hedgerows over a temporary cemetery called Jayhawk II had been started. Sheffloe and the others, two to a foxhole, took turns sleeping or standing guard every hour. They got their first taste of the war after 11 pm and every night thereafter when a German plane flew over the American line. The German pilot earned the nickname “Bedcheck Charlie.” The American antiaircraft guns on land and at sea responded, lighting up the sky. “It was a spectacular sound and light show,” recalled Sheffloe.

After a few days in bivouac, Sheffloe’s company commander called the men over to a truck. An officer from the 8th Infantry Division’s 121st Infantry Regiment pointed at 12 soldiers and said, “You, you, you, you, come with me.” Sheffloe was not picked, but his buddy, Private Witt, was.

Then the officer said, “I need a BAR man.” Sheffloe raised his hand and was picked. He was now part of the 121st, the Old Gray Bonnet Regiment, originally from the Georgia National Guard.

The truck delivered the replacements to a field near La Hay-du Puits, three miles north of Leese, the front line. An officer asked who his new BAR man was, but Sheffloe did not put up his hand. He was instead assigned as second scout for Lieutenant William Kapuscinski’s platoon in Company E. Private Witt was also assigned to Company E, but to a different platoon. Sheffloe liked his new lieutenant and felt the feeling was mutual.

On the first afternoon, Sheffloe learned there would be a night attack, but in a few hours it was cancelled. The next day a sergeant took Sheffloe and five other men a half mile south to a farmhouse. “You six will stay here,” he told them.

“We didn’t know it,” said Sheffloe, “but we were an outpost on the front.” The farmhouse contained a huge barrel of apple cider, which the men sipped until a nearby tank destroyer unit found out and drained the barrel into jerry cans.

One night at the outpost, Sheffloe heard a German burp gun fire at close range. He perked up his ears and put his finger on the trigger of his M1 Garand rifle.