The Battle Over the U.S. Postal Service, Explained 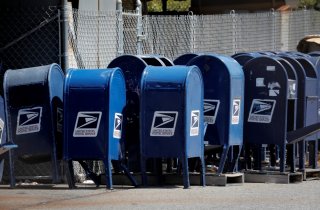 Less than three months out from the presidential election, the United States Postal Service (USPS) has become the centre of a political storm. So much so that Nancy Pelosi, speaker of the House of Representatives, has recalled the house from its August recess to vote this week on legislation designed to support the service.

What is the issue, and why is it important?

In May, the Democrat-controlled House of Representatives passed a $3 trillion coronavirus relief package, which included relief funds for the USPS. It also included funding for expanded postal voting, which Republicans oppose because in many areas of the country, more registered Democrats have requested postal ballots than registered Republicans. The most powerful Republican in Congress, Senate majority leader Mitch McConnell, refused to allow a vote on the Bill.

The USPS has warned that without additional support, it may not be able to meet deadlines for delivering voting ballots. This could have a big impact for November’s election because voters are expected to vote by mail in unprecedented numbers. In many states, ballots must be received by an election office by election day in order to be counted.

President Donald Trump has a long history of attacking the USPS. In a July tweet, claimed postal voting “will lead to the most corrupt election in our nation’s history”, and that postal voting is a threat to democracy.

Trump said he opposed new postal funding because of his opposition to mail-in voting, which he maintains will benefit Democrats. He also claims, without evidence, that it is rife with fraud. He said:

they want $3.5 billion for something that will turn out to be fraudulent, that’s election money basically […]

A spokesperson for the Democratic National Committee responded that Trump admitted he was deliberately sabotaging the USPS to boost his reelection chances, and

is taking money the Post Office needs and holding up coronavirus relief for millions of struggling Americans and small businesses because he wants to try to stop more voters from voting safely in a pandemic.

Trump has repeatedly claimed, again without any evidence, that illegal voting prevented him from winning the popular vote in the 2016 election. Vice President Mike Pence initiated a voting integrity commission, and found no evidence of widespread voter fraud. The non-partisan Brennan Center for Justice found most allegations of fraud are baseless, with the rate of voting fraud in the US being between 0.00004% and 0.0009%.

Even Mitch McConnell stated he did not share the president’s concerns about voter fraud.

Despite his stated opposition, Trump does support postal voting in Florida, because the state has a good “Republican governor”.

At the same time, his election campaign is suing the state of Nevada (with a Democratic governor) to prevent sending absentee ballots to active voters.

The Situation is Entirely Political

The president has acknowledged his opposition to USPS funding support is because he wants to restrict many Americans from voting by mail. He has taken additional steps to achieve his goal.

In June 2020, Trump installed Republican donor Louis DeJoy as US Postmaster General. DeJoy is the chair of the finance committee for the 2020 Republican National Convention, and his wife, Aldona Wos, has been nominated by Trump to be the next US Ambassador to Canada. In addition to donating more than $2 million to Trump since 2016, DeJoy and Wos own stock and assets worth up to $75.3 million with USPS competitors.

In less than two months as postmaster general, DeJoy has banned postal workers from working overtime or making extra trips to deliver mail on time, and removed or reassigned 23 executives in order to centralise power around himself.

Several Democratic representatives have urged the FBI to investigate whether DeJoy’s actions are legal, given the “overwhelming evidence” he “hindered the passage of mail”.

The irony in all this is that after changing his official residence from New York to Florida, Trump inadvertently committed voter fraud by registering to vote under an out-of-state address (that is, the White House in Washington DC), which is not his legal residence. He corrected his registration one month later.

The president’s own actions suggests an opposition to voter fraud and postal voting unless it benefits him.

What happens from here? Probably nothing. If Trump wins re-election, the Democrats may impeach him again, but the Republicans in Congress have demonstrated no support for taking action against the president. There may well be court challenges but they could take time.

And with the election drawing closer, time is running out.