Be Pessimistic Toward China: It's Claiming Water as Territory 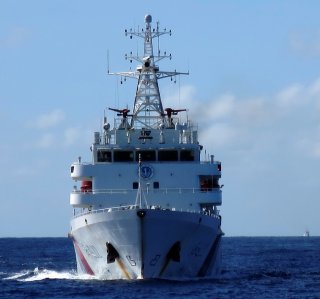 Here's What You Need to Remember: China has typecast itself in recent years: everything it does ends up being geared to political ends—ends that typically involve expanding its authority seaward while banishing painful memories. Past performance may be no guarantee of future results, but it’s the safest way to bet.

China’s longstanding campaign to redefine water as territory—territory where the Chinese Communist Party’s (CCP) fiat is law—proceeds apace. Lovers of maritime freedom must reject this campaign in all its forms. In other words, all nations that use the world’s oceans and seas to transact diplomacy, trade and commerce, and martial enterprises must rally against it.

Exhibit A: last week the CCP-affiliated tabloid Global Times reported that Beijing plans to amend its Maritime Traffic Safety Law (1984). The revised law will empower the authorities to “designate specific areas and temporarily bar foreign ships from passing through those areas according to their own assessment of maritime traffic safety.” Among other provisions, it will require foreign submarines to pass through “China’s waters” on the surface while flying their national flags to identify themselves.

CCP potentates are apt to take an extravagant view of what constitutes “China’s waters.”

The Legislative Affairs Office of the ruling State Council further declared that the amendments conform to the UN Convention on the Law of the Sea (UNCLOS), often dubbed a “constitution for the oceans.” And so they may—if China restricts the law to the territorial seas authorized by UNCLOS. For instance, Article 20 of UNCLOS explicitly states: “In the territorial sea, submarines and other underwater vehicles are required to navigate on the surface and to show their flag.”

Then why bother tinkering with domestic law? Two possibilities: one, China is making a minor modification to the law to conform to the law of the sea, or two, it has ulterior motives. If the first holds, there’s little point in ballyhooing a banal restatement of international law. But if the second scenario holds, this represents yet another attempt to extend Beijing’s territorial sway through lawfare. Chinese leaders, that is, are shrouding their creeping encroachment in concern for maritime safety.

And that’s the case in all likelihood. If nothing else, Occam’s Razor should incline observers toward the latter reading of Beijing’s motives. China has typecast itself in recent years: everything it does ends up being geared to political ends—ends that typically involve expanding its authority seaward while banishing painful memories. Past performance may be no guarantee of future results, but it’s the safest way to bet. Especially when past performance has been so consistent.

So it’s doubtful in the extreme that China will confine its lawmaking endeavors to the territorial sea, the twelve-nautical-mile belt of sea just off its coasts. What will it do? For one thing, it may apply the law to the seas adjoining underwater rocks that engineers have manufactured into fortified outposts—even though such features are entitled to no territorial sea by treaty. Dredging up seafloor confers no legal prerogatives.

More likely, though, CCP officialdom will try to enforce the law throughout the South China Sea, and probably elsewhere in the China seas to boot. Until Beijing proves otherwise, consequently, we should interpret its latest move as yet another effort to project the force of Chinese domestic law throughout the waters and skies within the “nine-dashed line” inscribed on China’s map of the South China Sea.

Thus the Maritime Traffic Safety Law represents a small part of a larger bid to repeal—not reinforce—the law of the sea in some 80–90 percent of a major waterway.

In other words, it will define the South China Sea—high seas, exclusive economic zones, and all—as territorial waters. After all, if China commands “indisputable sovereignty” (or sometimes “irrefutable sovereignty”) within the nine-dashed line, as spokesmen incessantly claim, then it stands to reason that CCP chieftains are the lawgivers there. Making rules and compelling others to obey is what sovereigns do.

Nor are these shenanigans necessarily confined to Southeast Asia. It’s easy to imagine, say, Beijing’s insisting that maritime-safety rules apply to traffic in the waters lapping against the Senkaku Islands. If China considers the archipelago its rightful property despite Japan’s longstanding administrative control—and it does—then it only makes sense that Chinese domestic jurisdiction extends there.

If China did seek to enforce its rules around the Senkakus, it might well try to evict any Japan Coast Guard and Maritime Self-Defense Force ships patrolling there. It has already deployed massed fleets of fishing craft and China Coast Guard vessels to the archipelago, mounting a challenge to Tokyo’s administrative control. Chinese warships skirted within twelve nautical miles of the islets earlier this month—broadcasting a message of defiance to Japan and its superpower patron, the United States, which have vowed to defend them against attack.

What to do about all this? First of all, recognize what China is up to. Even Beijing’s most inconsequential-seeming moves are meant to advance the larger agenda. Governments, then, must pay even an apparently routine action like amending a maritime-safety law close scrutiny lest they lend credence to—or even abet—China’s high-seas encroachment.

Second, stop affording China the benefit of the doubt when it does something to expand its power at fellow Asians’ expense. A weird syllogism seems to underlie commentary on Chinese sea power and the purposes impelling it: if there’s one scintilla of doubt about China’s motives, we must scratch our chins, ponder and refuse to draw conclusions lest we anger Voldemort. Call it Voldemort’s Razor.

Meanwhile China goes about its business—and leaves commentators and strategists flailing to catch up by the time its actions remove that last scintilla of doubt. Deliberately putting yourself behind the times represents faulty foresight and bad strategy.

No more. Let’s scrap Voldemort’s Razor. If Beijing wants others to assume the best about its purposes, let it conduct itself as such. Let it earn back the benefit of the doubt by keeping its international commitments over a long stretch of time. Let it disavow the nine-dashed-line map, rededicate itself to upholding the law of the sea, and cease claiming the marine commons as sovereign territory.

And third, resolve to comply with precisely zero excessive demands emanating from Beijing. Indeed, the seagoing world must flout such demands early and often to avoid the semblance of accepting them. Perpetual vigilance and resolve constitute the price of freedom of the sea. Preserving freedom to use the maritime commons is America’s top priority in maritime Asia—and it should be fellow seafaring states’ top priority as well.

So be pessimistic toward China’s intentions. Be pessimistic and China will constantly prove you right! Or, in the doubtful event Beijing mends its ways, you’ll be pleasantly surprised when proved wrong.