Beauty in Simplicity: All New F-16s Will Stick to One Base Model 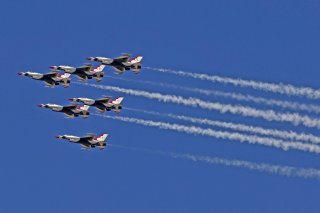 Here's What You Need to Remember: Don't worry. One base model does not mean one-size-fits-all.

Lockheed Martin’s hugely successful F-16 Fighting Falcon will now be manufactured exclusively to the V, or Viper standard in order to simplify manufacture and orders, especially for international customers.

Lockheed Martin’s iconic F-16 platform is one of the most recognizable modern jet fighters the world over. According to company information, over 3,000 F-16s are in service today with 25 countries, affirming the bird’s capabilities. By some estimates, F-16s make up an outsized 16% of the total number of jets flown by militaries around the world. And Lockheed Martin has a plan for selling even more.

The F-16 Block 70/72 variant, also known as the Viper, will become the base F-16 model. In addition to a reduced radar cross-section, Lockheed claims that the Viper’s estimated structural life is 50% greater than previous F-16s. Rather than tailor-making F-16s to buyers' demands, Lockheed hopes to streamline the contracting and production process by offering just one base model.

Still, potential future customers would be able to make other equipment requests on top of the F-16V base. In the case that some customers want something different than the base F-16V doesn’t offer, they can still purchase other bells and whistles to be added on.

Take the F-21 as an example. The F-21 is an F-16 variant currently on offer to India and has a different cockpit layout than other F-16s along with large conformal fuel tanks. Thanks to improved missile launcher adaptors, the F-21 can even carry 40% more air-to-air missiles than the previous F-16 — and it’d be locally manufactured in India by Tata Advanced Systems. If chosen, Lockheed Martin would help deliver 110 of the advanced fighters to the Indian Air Force.

The United States’ Countering America’s Adversaries Through Sanctions Act (CAATSA) has been a tough pill for a number of countries, especially post-Soviet countries, or countries whose flying branches depended on Soviet patronage in the past. Among other things, CAATSA penalizes purchasers of Russian military equipment. Countries that wish to procure American systems are not penalized.

Lockheed touts their F-16 as an ideal stepping stone for countries who want to retire their older Soviet-era MiGs and Sukhois, but can’t go straight into the F-35 stealth fighter program. Even some NATO member countries who aren’t currently F-35 operators may find it beneficial to upgrade to the older — but nonetheless nimble F-16 beforehand.

The Lockheed website summed up their position best, stating simply, “Lockheed Martin has more than 36 years of weapon integration experience with the F-16…Our experience as a weapon integrator has enabled the F-16 to be one of the most versatile multirole fighters ever.”

Although the F-16 first flew nearly 50 years ago, the upgraded airframe remains relevant. Coupled with the CAATSA, it likely won’t be taken out of production any time soon.

Caleb Larson is a Defense Writer with The National Interest. He holds a Master of Public Policy and covers U.S. and Russian security, European defense issues, and German politics and culture. This first appeared earlier and is being reprinted due to reader interest.