A Bee Tried to Pollinate Our Editor’s Porch Ring Camera 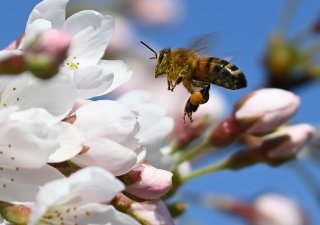 Here's What You Need to Remember: Ring camera owners have used the technology to follow the progress of their bird feeders, and one Ring owner-in Texas, of course,  caught a cow walking up to their front door.

Ring, the home security camera company owned by Amazon, is mostly known for providing the sorts of cameras that frequently catch "porch pirates," and other criminals, in the act. Sometimes the cameras even provide clear video evidence of violent crimes, which end up used as evidence in criminal proceedings.

However, occasionally Ring cameras capture surprising things that have nothing to do with crime. Such as this week, when a Ring camera in Maryland owned by our editor, Harry J. Kazianis, came face to face with a bee.

As you can see in the video below, beginning at around the 44-second mark, a bee appeared to attempt some sort of pollination of Harry's camera for several seconds. It's unclear what exactly the bee thought he was looking at, but he ultimately gave up and buzzed away.

While Ring cameras are often used to capture crimes in progress, they've been known to capture lighter things. Per this Handyman article, that includes people dressed as clowns, people licking doorbells, snakes, cats falling off a roof, and a small child who crawled away from his mother and back towards the house.

Ring technology has also been used in order to both capture pranks, and to carry out and record them. Ring camera owners have used the technology to follow the progress of their bird feeders, and one Ring owner-in Texas, of course,  caught a cow walking up to their front door.

Ring was founded in 2013, with help from both crowdfunding and an appearance on Shark Tank, although the sharks ultimately did not invest in the company. The company's initial product was the Ring Video Doorbell, although it later launched the  "Stick-Up Cam" and followed that up with other cameras, as well as subscription plans and the associated Neighbors app.

Basketball star Shaquille O'Neal later acquired a stake while also becoming a pitchman for the product. After more funding, the company was acquired by early 2018 by Amazon for over $1 billion.

Amid its success, Ring has been criticized at times, by politicians and civil liberties groups, for its sharing of data with police departments, and for leaving its video files unencrypted. The company, The Intercept reported last year, has declared itself part of a "war" against "dirtbag criminals."

Stephen Silver, a technology writer for The National Interest, is a journalist, essayist and film critic, who is also a contributor to Philly Voice, Philadelphia Weekly, the Jewish Telegraphic Agency, Living Life Fearless, Backstage magazine, Broad Street Review and Splice Today. The co-founder of the Philadelphia Film Critics Circle, Stephen lives in suburban Philadelphia with his wife and two sons. This article is being republished due to reader interest.