Behind on Your Student Loans? It Could Impact Your Child Tax Credit Eligibility 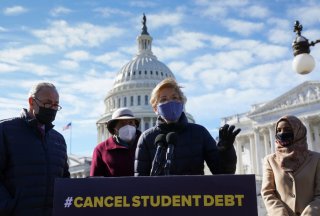 Here's What You Need to Remember: Taxpayers who are in default on their federal student loans may not see this benefit, according to Forbes, due to the Treasury Offset program that permits the federal government to block any federal benefits for defaulted student loan borrowers and redirect the money to their loan balance.

Taxpayers who are in default on their federal student loans may be ineligible to receive the child tax credit payment from President Joe Biden’s coronavirus rescue package.

Biden’s $1.9 trillion American Rescue Plan boosted the child tax credit from $2,000 to $3,000 and allowed parents with children under the age of 6 to qualify for $3,600. The measure also permits parents of children at the age of 17 to be eligible for the credit.

Recipients, however, can opt out of the monthly payments and receive the credit in one lump sum.

But taxpayers who are in default on their federal student loans may not see this benefit, according to Forbes, due to the Treasury Offset program that permits the federal government to block any federal benefits for defaulted student loan borrowers and redirect the money to their loan balance.

The program has been temporarily inactive after Biden extended the Cares Act measure in his relief bill passed earlier this year. The Cares Act paused all payments on federal student loan debt, adjusted interest rates to zero, and halted all collection initiatives by the government, including the Treasury Offset program.

The student loan assistance efforts, however, are slated to expire at the end of September.

That means the Treasury Offset program can proceed, which could potentially impact over five million borrowers who are in default on their federal student loans, eliminating the chance of receiving the child tax credit.

Several higher education advocates have raised concerns over the issue, arguing that the Biden administration must take “swift” action.

“Unless the administration takes swift and decisive action, cash made available through one of the most important tools that the nation has in its arsenal to fight poverty will soon be denied to struggling student loan borrowers and instead intercepted by the Department of Education,” Persis Yu, the director of the Student Loan Borrower Assistance Project at the National Consumer Law Center, and Seth Frotman, the executive director of the Student Borrower Protection Center, wrote in a blog post for the National Consumer Law Center.

In the meantime, progressive Democrats have continued to pressure the White House to unilaterally cancel $50,000 in student loan debt for every federal borrower, though Biden has only indicated support for a $10,000 cancellation initiative. The president did, however, instruct the Education Department to look into his authority to enact broad student loan forgiveness.