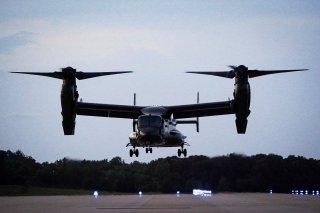 Here's What You Need to Know: Bell’s research into tiltrotor aircraft stretches back over sixty years. In the mid-1960s, Bell built the X-22, a one-off four-rotor tiltrotor design made to provide insight into tiltrotor designs. About a decade later, Bell developed its own Bell XV-15 as a proof-of-concept prototype. The design later contributed to the newer and larger V-22 Osprey.

In a statement, Bell Textron revealed plans for a new family of high-speed Vertical take-off and landing design concepts. In addition, company promotional material showed three similar airframes flying with what appeared to be foldable rotor blades that would offer a more aerodynamic profile and therefore offer potentially more significant range and airspeed.

Exact details on the design concept are scarce. However, Bell outlined the platform’s goals, listing off several bullet-pointed characteristics, including “jet-like” cruise speeds of more than 400 knots, low hover downwash, scalability to fit a range of missions—including unmanned personnel recovery, and an aircraft weight range from 4,000 to 100,000 pounds.

It may be possible that the design concept airframes Bell showcased may use more than one engine type, perhaps reliant on tiltrotors to become airborne, than capable of transitioning to jet flight for faster airspeeds. However, this remains speculative.

In any case, Bell is well-positioned to push the field of tiltrotor aircraft further. For example, the company is behind the V-22 Osprey, a tiltrotor design that offers significantly greater range than most helicopters and higher airspeeds. The V-22 Osprey is in service with the United States Marine Corps and the Navy, Air Force, and Japan Self-Defense Forces.

Though the V-22 Osprey has been one of the company’s more unique—and successful—offerings, it is not the first time that Bell has explored other tiltrotor designs.

Bell’s research into tiltrotor aircraft stretches back over sixty years. In the mid-1960s, Bell built the X-22, a one-off four-rotor tiltrotor design made to provide insight into tiltrotor designs. About a decade later, Bell developed its own Bell XV-15. The small tiltrotor served as a proof-of-concept prototype and never entered serial production, though the design contributed to the newer and larger V-22 Osprey.

“Bell’s HSVTOL technology is a step-change improvement in rotorcraft capabilities,” explained Jason Hurst, vice president, Innovation in Bell’s design concept statement. “Our technology investments have reduced risk and prepared us for rapid development of HSVTOL in a digital engineering environment, leveraging experience from a robust past of technology exploration and close partnerships with the Department of Defense and Research Laboratories.”

Although Bell’s HSVTOL design concept appears to still be just on the drawing board, the company is well-positioned to make its latest high-speed tiltrotor a reality.