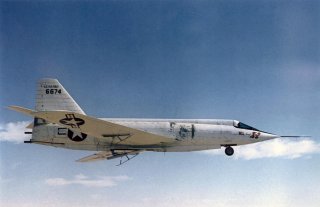 Here's What You Need to Know: Despite the escape system, the X-2 was a dangerous plane to fly, accounting for 20% of the X-series program’s fatalities.

Like the record-setting Bell X-1, the X-2 was built to explore flight characteristics at supersonic speeds. Though the X-1 had given the Air Force insights into transonic and supersonic flight, additional flight data was needed for flight in the Mach 2 to Mach 3 range. Though the research platform experienced some hiccups during flight, it was the first aircraft to exceed Mach 3, a huge achievement.

Like its predecessor, the X-1, the X-2 was powered not by jet engines but by a rocket engine. This liquid-fueled motor had a massive 15,000-pound thrust output, well-suited to exploring flight at supersonic speeds. NACA, the predecessor to NASA, was interested in exploring ”aerodynamic problems of supersonic flight and to expand the speed and altitude regimes obtained with the earlier X-1 series of research aircraft.”

Though the X-2 could take off from the ground like a conventional jet-powered airplane, using the limited onboard fuel would leave less propellant available to burn once at altitude. In order to conserve fuel, the X-2 was usually slung under a large B-50 bomber. The large B-50’s bomb bay had to be modified in order to hold the X-2 partially internally, with the test pilot inside the smaller plane’s cockpit. At around 30,000 feet, the X-2 could be released in much the same way as conventionally explosives are released.

Many X-series flight tests happened near Edwards Air Force Base. This location was close to Rodgers Dry Lake, a dry and hardened lakebed near the base that was ideal for landing airplanes. Though the X-2 had nose-mounted landing gear, it had dual sky-type landing gear at the rear. The X-2 benefited from a swept-wing design, which was more aerodynamically efficient than the X-1’s straight-wing design and allowed it to break Mach 3.

Uniquely, the X-2 had a parachute escape pod mated to the nose. During an emergency, the test pilot could separate the nose from the airframe. The escape pod’s descent would be slowed with a large parachute. At a safe altitude, the pilot could then jump out of the pod and, once clear, he would release his own parachute and float to safety. Despite the escape system, the X-2 was a dangerous plane to fly, accounting for 20% of the X-series program’s fatalities.

During an early preflight test, an X-2 airframe exploded while in a B-50 mothership’s bomb bay, killing both the test pilot and the bomber pilot. Both airframes were irrecoverably damaged. The X-2’s last flight was one for the record books—though also deadly.

After completing a successful release from the B-50 mothership, Air Force test pilot Capitan Milburn “Me” Apt blew past Mach 2 and approached Mach 3. Rocket engine blazing, the test pilot reached Mach 3.2, and at the time became the fastest pilot ever at more than three times the speed of sound—but his record cost him his life.

Somewhat inexplicably, Apt initiated a hard banking maneuver while still at Mach 3+ speeds. He quickly lost control of the X-2, which entered an uncontrollable spin and began to tumble out of the sky. Though he was able to separate the nose escape pod from the aircraft, he was likely knocked unconscious by high G forces and did not jump out of the escape pod, immediately dying on impact.

Though the X-2 program generated valuable data that contributed to American jet plane designs, it came at a cost. The three deaths that occurred during the program life tarnished its accomplishments.