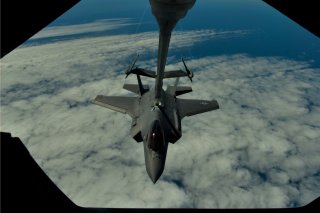 When an Air Force fighter jet or bomber closes in on a high-value target area or an Army ground unit moves to attack, success or failure can often hang in the balance of satellite networking.

A sufficiently hardened, multi-directional signal can ensure that pilots quickly receive target coordinates, navigational detail or sensitive threat information of great relevance to the mission. Should target accuracy be compromised, signal fidelity jammed or flight path be compromised by threats from unanticipated directions, mission objectives could be destroyed and lives are put at risk.

Given this, throughput, multi-frequency, multi-directional antennas, coupled with secure “meshed” networking between satellites, is considered crucial to war planners looking to increase the strength and speed of space connectivity.

“We are looking at how we can use satellites to enhance the speed of targeting,” Army Secretary Ryan McCarthy told Warrior during a recent experiment in Arizona.

With all this in mind, the Air Force Research Laboratory (ARFL) is moving quickly on an interesting deal with SES Government Solutions and Isotropic Systems to achieve new levels of “next-generation” connectivity. The AFRL deal, which includes input from the U.S. Army Research Engineering Team, is testing Isotropic Systems’ emerging multi-beam terminal over SES’s 03b Medium Earth Orbit (MEO) satellite constellation.

Through the deal, the U.S. Air Force and Army, through the innovative Defense Experimentation Using Commercial Space Internet program, will review “a prototype of Isotropic Systems’ optical beamforming antenna and its ability to connect simultaneously with two satellite constellations at GEO (Geosynchronous Earth Orbit) and MEO. The unique multi-beam capability will enable the armed forces to deliver data at the tactical edge by leveraging capacity from multiple commercial satellites and a military satellite over a single antenna platform,” an SES Government Solutions statement reads.

“The Isotropic antenna will deliver high throughput, at low latency over a MEO constellation with simultaneous resilient GEO capacity,” Pete Hoene, President and CEO of SES Government Solutions, said in a company statement.

The value-added with this new technology is to enable a single, smaller-form factor, surface mounted, software-definable antenna that can emit a precise, narrowly configured electronic signal to several satellites at once—all while consuming less on-board power and increasing precision. It is a single, multi-beam antenna, which relies upon Isotropic’s new signal-forming optical lens technology, Isotropic Vice President of Development Brian Billman, told TNI in an interview earlier this year.

MEO, GEO and Low Earth Orbit (LEO) satellites were recently assessed in a Army experiment in the Arizona Desert called Project Convergence 2020. During the exercise, an armored combat vehicle in the Arizona engaged in a “direct fire” mission to destroy an enemy tank target, after receiving targeting cues via radio from an overhead surveillance drone, mini-drone and helicopter. (However informational details and locations specifics on the target first came from fast-moving, low-altitude satellites operated in Washington State.)

“What you saw here was the first phase of information being fed by MEO, GEO and LEO satellites. That is what was going through Washington state into a surrogate ground control station. Then that ground station was sending data,” Maj. Gen. John George, Commanding General of the Army’s Combat Capabilities Development Command, Army Futures Command, told The National Interest in an interview on the ground at Yuma.