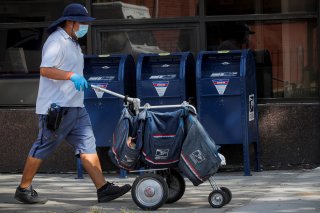 Thousands of baby chicks shipped to small poultry farmers through the U.S. Postal Service have arrived at their destinations dead in recent weeks.

This was just one of the disturbing results of changes to how the Postal Service operates, which have led to widespread delays in mail delivery and concerns among Democrats about the USPS’s ability to delivery mail-in ballots during the 2020 elections. There have also been reports of delayed lifesaving medications, rotting meat and spoiled fruits.

I have studied the supply chain industry for over 15 years. One thing people outside the field don’t often recognize is the critical role the USPS plays in America’s logistics infrastructure, especially for small businesses and in rural areas, as the only service that delivers to nearly every U.S. address, six days a week. My research shows how it can continue to do so.

The dead chicks show just how important the Postal Service is to small businesses and their supply chains.

Hatcheries typically ship the birds to farmers by USPS, the only service that allows people to send live animals. However, newborns can survive only 72 hours without food or water, which translates into a tight delivery window. Upon arrival at the regional destination, the cargo goes to a local mail processing facility for sorting and then aboard a delivery truck for distribution.

Recent changes to operations – such as reduced overtime and prohibiting extra trips, moves intended to address USPS’s severe fiscal problems – have slowed down the processing and distribution of packages, leading to buildup and causing delays. The consequences are particularly grievous for live animals, such as chicks, crickets and other small critters delivered by the USPS. It also causes losses to perishable goods such as meat and flowers.

But beyond organics, small businesses, pharmacies and online businesses also rely on dependable deliveries to keep their supply chains humming or to ensure consumers get orders on time.

In the past, it’s rarely been a problem. And USPS has a very good track record. Data from ShipMatrix, a delivery analytics company, shows that the Postal Service delivered 95% of packages on time in May – before the delays began – which it has maintained for many years.

An internal document released by House Democrats, however, shows that on-time delivery dropped under 85% in July.

Role in the Supply Chain

To appreciate the importance of a reliable post office, we can look at the percentage of retailers that rely on it for package delivery. Nearly 20% of the top 1,000 retailers fulfill at least some of their e-commerce orders through the Postal Service.

The USPS is even more important for small- and medium-sized businesses because of its wide reach and affordable flat rates. For instance, over 90% of U.S. Etsy sellers depend on the USPS.

Delays can mean a loss of business or costly refunds. Their customers can easily find alternative sellers online, and larger retailers like Walmart and Costco can offer faster delivery alternatives free – so the ability to get products fast and reliably is vital for small retailers with narrow margins.

The Postal Service is particularly vital for businesses in rural or isolated regions trying to participate in the growing e-commerce economy. Unlike UPS or FedEx, the Postal Service has the infrastructure to reach all corners of the country, six days a week – which is mandated by law. In fact, nearly half of all U.S. ZIP codes represent rural areas, which USPS is able to serve cost-effectively to sellers and customers.

UPS and FedEx themselves also rely on the USPS to deliver packages the “last mile” – the term for the final stage in the delivery process – especially in rural areas, because it isn’t profitable for them to operate in regions with low population densities. This means delays at the Postal Service can have ripple effects across the delivery system.

Without a reliable Postal Service, small businesses may need to resort to pricier FedEx and UPS options. This means higher costs that could severely hamper their ability to operate and compete on top of the impact of the pandemic and economic lockdowns.

How to Stay Reliable

While Postmaster General Louis DeJoy said the USPS is reversing recent changes that caused the delays until after the elections, something will have to be done to deal with the Postal Service’s dire financial state. It’s losing billions of dollars a year due to a mixture of declining snail-mail volumes, a legal requirement to fund pensions for 75 years and other factors. Political gridlock means a bailout is unlikely.

In my view, DeJoy’s changes were overly drastic in a too-short time, but I believe some cost-cutting over a longer period of time will be necessary to repair its balance sheet.

But that doesn’t mean the USPS can’t continue to play its critical role. My own research on supply chains suggests that the USPS can both address its budget shortfalls and remain the only genuinely nationwide provider of low-cost, last-mile delivery for small businesses and isolated regions. The Postal Service is still operating with older, pre-digital technologies, and urgent upgrades to its delivery and last-mile systems – such as utilizing artificial intelligence to improve delivery routing and facility management – are necessary to ensure it can compete effectively against as well as cooperate with rivals like UPS, FedEx and even Amazon in the growing e-commerce economy. This would help reverse its recent declines in revenue.

However, if the focus is merely on cutting costs without modernization, small businesses and rural America will have to prepare for a future in which they might not be able to rely on USPS as they have for 245 years.