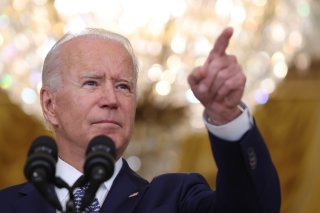 Here's What You Need to Remember: The Census Bureau’s Household Pulse Survey revealed that an estimated 10 percent of American households with children sometimes or often didn’t have enough to eat over the past week—the lowest percentage registered since the pandemic began in early 2020.

The Internal Revenue Service and the Treasury Department already are two months into the issuance of the expanded child tax credits that were approved under President Joe Biden’s American Rescue Plan.

And what the positive data from the August payments is showing is that an additional 1.6 million children received checks compared to the previous month. All told, the IRS disbursed roughly $15 billion in credit payments in the latest round that reached more than sixty million children.

“Sixty-one million children across America are benefiting from the advance Child Tax Credit, helping families put food on the table and meet the needs of the next generation,” the Treasury Department’s Deputy Secretary Wally Adeyemo said in a release.

However, the agencies are aware of recent studies and polls that suggest that millions of children could be left on the sidelines because the IRS doesn’t have the required personal and financial information to properly disburse the credits, which offer eligible parents a $250 or $300 payment for each child every month through the end of the year.

For example, a report released by the Center on Budget and Policy Priorities found that approximately four million children from low-income families are at risk of not receiving the monthly payments.

“This important new tax change affects millions of families across the nation, and the IRS wants to do everything it can to help people get the payments,” IRS Wage & Investment Commissioner Ken Corbin, who also serves as the agency’s Chief Taxpayer Experience Officer, noted in a statement.

“Many people miss out on tax benefits simply because they don’t file a tax return,” he continued.

The IRS for weeks has been pressing potentially eligible Americans to take advantage of the Non-filer Sign-up Tool that will give the tax agency the necessary information to send out the direct cash payments. The agency has also launched a brand-new feature that enables households to update their mailing address via the Child Tax Credit Update Portal, which can be found on IRS.gov.

“This feature will help any family that chooses to receive their payment by paper check avoid mailing delays or even having a check returned as undeliverable,” the IRS said.

Early data is already suggesting that the child tax credits are having a beneficial impact on millions of struggling Americans, especially children in low-income households, amid the ongoing coronavirus pandemic.

The Census Bureau’s Household Pulse Survey revealed that an estimated 10 percent of American households with children sometimes or often didn’t have enough to eat over the past week—the lowest percentage registered since the pandemic began in early 2020.