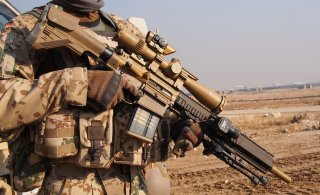 Here's What You Need To Know: The Biden decision to draw down in the Middle East is more of an adjustment than a seismic sea change.

The Biden administration’s recent decision to reduce the U.S. military presence in the Middle East can be seen in terms of two different perspectives: first, the background of a partial return to the traditional U.S. policy of isolationism; and/or second, a more immediate, mid-course adjustment in pursuing its present, active foreign policy goals.

For most of its history, the U.S. national style was characterized by isolationism regarding political entanglements in foreign policy along with a self-righteous, almost missionary emphasis on its own exceptionalism and aversion to power politics. War, of course, constituted a necessary exception to such isolation. However, as soon as peace returned, the U.S. national style demanded a return to its traditional stance of political detachment toward the rest of the world. Only the changed international balance of power after World War II began to alter this traditional state of affairs and force the United States into a more normal involvement in world affairs. Nevertheless, its traditional isolationism continues to influence its foreign policy positions to take what it considers to be the morally correct position, in this case, seemingly to reduce its Middle East presence.

However, on a more immediate level, Joe Biden’s decision can be seen as a necessary mid-course correction of faulty mission creep in Afghanistan and Iraq. Although the United States initially and justifiably entered Afghanistan in force to punish Al Qaeda’s attack on September 11, 2001, and terminate its leader, Osama bin-Laden, this limited goal was partially accomplished almost immediately by overthrowing the Taliban government and more than a decade ago with bin Laden’s death. However, during these twenty long years, the United States lost sight of its original goal and fell into the trap of mission creep and its false goal of nation-building.

In an ideal world, of course, women’s rights and the full panoply of human rights would prevail in Afghanistan, but even U.S. power has its limitations. In this particular case, the United States cannot bring Afghanistan into the twenty-first century against its will. If anybody is going to do this, it would be the mainstream Islamic world. The United States, acting through the United Nations and other multilateral bodies, could offer background support. Indeed, its supposed withdrawal from this “endless war” remains only partial as U.S. air support for the incumbent government remains. Further, if deemed necessary, a return to full U.S. involvement again remains just “over the horizon.” However, the time has come to direct U.S. resources abroad toward more important threats such as China, where recently the total Chinese naval tonnage has actually forged ahead of that of the United States, while its nuclear missile stockpile has been rapidly expanding.

As for the Biden withdrawal from Iraq, this too is not only the correct policy but less than meets the eye. Some U.S. troops, as well as air power, remain. And if necessary, they can easily return as they did when ISIS struck in 2014. This admittedly ignores whether ISIS ever would have struck in the first place if the United States had not earlier withdrawn from Iraq at the end of 2011 and failed to get more involved in the Syrian civil war that also began in that year—actions that arguably opened the space for ISIS to arise so shockingly.

In conclusion, the Biden decision to draw down in the Middle East is more of an adjustment than a seismic sea change. It is in no way comparable to the British decision a half-century ago to withdraw from east of Suez. Furthermore, U.S. support for Israel and the Kurds in Iraq and Syria will continue as it will for Egypt, Saudi Arabia, and Jordan, among others deemed necessary. On the other hand, hostile Iran also will continue to require close attention.