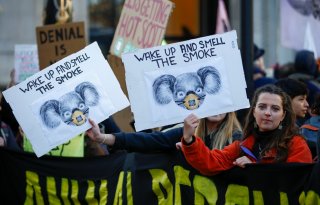 US Democratic presidential nominee Joe Biden is campaigning on a platform that puts climate action front and centre. At the Democratic National Convention last week, he outlined a US$2 trillion clean energy and infrastructure plan, a commitment to rejoin the Paris climate agreement and a goal of net-zero emissions by 2050.

This contrasts starkly with the agenda of President Donald Trump, which has involved rolling back climate regulations and plans for a US withdrawal from the Paris deal.

Clearly, a Biden election win would bring a climate policy sea change in the US – the world’s second-largest greenhouse gas polluter and a key player in any international agreement.

The Trump presidency has been a godsend for an Australian government apparently uninterested in significant climate action. But with Trump behind in the polls, a Biden presidency would further expose the Morrison government’s lack of climate ambition – a position that was already fast becoming indefensible.

In international terms, Australia’s emissions reduction commitments are clearly at the lower level of ambition.

It’s pledged a 26% reduction from 2005 levels by 2030, and plans to “carry over” carbon credits earned during the Kyoto protocol period to substantially reduce the emissions reduction task under Paris. Even given this modest goal, and the emissions slowdown during the pandemic, it’s still not certain Australia will meet its target.

But unlike the US, at least Australia can point to its continued commitment to the Paris Agreement itself. And the Morrison government’s claim that Australia’s emission reduction will have little global impact is easier to make when a major emitter is refusing to take substantive climate action.

But that state of play will change under a Biden presidency. Importantly, the new administration will likely use its re-entry to the global climate action “tent” to push other countries to increase their ambition.

This would put pressure on Australia ahead of COP26 – the next round of United Nations climate talks in Glasgow, in November 2021. The central focus of these talks – postponed from 2020 – will be new national commitments on emissions reduction.

Under the terms of the Paris Agreement, countries have to ratchet up their commitments every five years. So far, there is no indication Australia will comply but ahead of the next COP, host nation the UK will be among a group of nations pushing the Morrison government to go harder. Under Biden, the US would likely join the chorus.

Pressure from all directions

Even without a Biden presidency, other forces are making Australia’s climate position less tenable.

Pressure from Australia’s near neighbours has been significant. At the 2019 Pacific Islands Forum, the Morrison government was roundly chastised for its climate inaction – an issue central to the concerns of Pacific island states. Indeed, it seems clear Australia’s climate policy is undermining the Morrison government’s so-called Pacific step up, making effective engagement with the region much more challenging.

At home, the devastating effects of the last bushfire season brought Australian climate action into sharp focus. Under climate change, natural disasters such as bushfires will become more frequent and severe.

The National Farmers Federation, historically a relatively conservative voice on climate policy, last week called for Australia to commit to the same target as Biden – net-zero emissions by 2050.

This target is also a feature of the federal opposition’s position on climate policy, together with a 40% emissions reduction by 2030. Current Labor infighting over the policy after its 2019 election loss casts some doubt on that commitment. But the party’s climate change spokesman Mark Butler, and others in Labor pushing Australia to do more, will surely be empowered by the dynamics noted above.

If the case for emissions reduction needed strengthening further, a Greenpeace report released on Monday, reviewed by scientists, found pollution from Australia’s 22 coal-fired power stations is responsible for 800 premature deaths each year.

Added to this, research has found more coal power generation closed than opened around the world this year. And the International Energy Agency says renewable electricity may be the only energy source to withstand the COVID-19 demand shock.

Combined with the falling cost of renewables technology, the Morrison government’s dogged support for the fossil fuel industry is increasingly unjustifiable.

A Biden presidency won’t be a silver bullet for Australian climate policy. The Morrison government has shown itself willing to shrug off international condemnation and view climate action primarily through the lens of mining exports and electricity prices. And for that, they’ve arguably been rewarded at the ballot box.

But domestic and international pressure for Australia to do more is increasing. A Biden election victory would certainly make it that bit harder for Australia to keep its head stuck in the sand.